Instead of reading the prologue, you can just watch this book trailer! 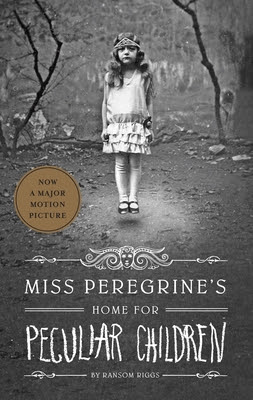 Despite the fact that there are reviews of this book all over the freaking place, I started Miss Peregrine's Home for Peculiar Children with very little idea of what it was about. When I read the reviews, all I heard was: "Pictures! Creepy pictures of olde-timey kids being creepy!" That alone was enough to make me want to check Miss Peregrine's Home for Peculiar Children out, of course, but there's a lot more to the novel than just pictures, and honestly the creepy kid photos are probably the least-successful element of the book.

Not that they're UNsuccessful. I can see where Ransom Riggs (incredible name for a writer, by the way) was going with that idea, and I love it. But I'm not sure including the photographs in the text was necessary, and at times it felt gimmicky. Why are these kids running around taking pictures of themselves and then saving them all? Where are these photographs even developed in the time loop, hmmm?

I did adore Riggs' writing style and the voice of the main character, Jacob. As someone whose own grandparents come from Germany and lived through WWII, I really connected to all the generational things going on between Jake and his dad and grandpa. He also freaking TIME TRAVELS--I mean, come on. That's really the best part of the novel (although the entire time I kept thinking, "Nazis aren't enough, we need wights and hallows too?" A little OTT). Riggs can write creepy REALLY well. Honestly, for the first three-fourths of Miss Peregrine's Home for Peculiar Children, I didn't want to put the book down at all.

Then I hit the last quarter of the book and it started to literally put me to sleep. I think it's mainly because the "magical" elements of Miss Peregrine's Home for Peculiar Children aren't grounded enough in the world of the novel; or maybe they're just too obvious? It was as if Miss Peregrine's started off as magical realism and then switched to middle-grade fantasy. I pretty much lost all emotional investment in the story by the end of the book.

My feelings about Miss Peregrine's Home for Peculiar Children are very mixed at this point, but I have say it's interesting--and I mean that in a good way. Intriguing concept, unexpected story, and a writer who's not afraid to take chances. I love how Riggs took real photographs and quilted them together into a story with emotional depth. As I'm always willing to reward experimentation even if it doesn't quite hit the mark, I think this might be one of my more memorable reads of the year.