The Making of a Duchess by Shana Galen 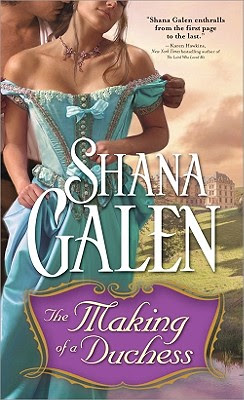 This book is pretty silly.  It's not the worst thing I've ever read, but seeing as how it doesn't have much in the way of originality, storytelling, or romance, I'm not sure why a person would want to spend their time reading it.

Sarah Smith is an orphan and a governess for the famous war hero, Sir Northrop.  What she doesn't know is that Sir Northrop is still involved in the defense of England, and after one of his spies is incapacitated, he orders her to take the woman's place as the Duc de Valère's presumed fiancée, Serafina Artois.  Her mission, whether she chooses to accept it or not, is to find evidence indicating the duc (as the author insists on spelling it) is a traitor.  But since Sarah has no idea how to be a spy, that's pretty hopeless cause, n'est-ce pas?  Oh, and the duc and Sarah are inexplicably attracted to each other.

Just so you know from the outset, I feel kind of tricked by this book.  I was expecting a story about spies, but neither of the main characters is a spy.  The style of the dress on the cover and the synopsis led me believe that it would be set during Revolutionary France, not Regency England.  And the term "game of cat and mouse" indicated to me this would be a thriller of some sort, not a comedy of errors.

So needless to say I had a lot of problems with this book.  As far as telling the story in the best way possible, the novel needs help.  The first chapter was clearly a prologue, so I skipped it.  The second chapter wasn't exactly gripping, either.  All the "plot twists" were not only predictable--which would be bad enough--but completely obvious in the first fifty pages.  I am not exaggerating, it blew me away how the author just gave everything away like it was Christmas morning and she was a shopaholic.  Not to mention there were a lot of plot holes--for example, why would a French duke who has had nearly his entire family murdered by Revolutionaries spy for Napoleon?  No one even raises this question.  There's never any doubt in the reader's mind that Julien--aka monsieur le duc--is neither a spy nor a traitor (although the whole traitor thing is a little confusing, since one doesn't know if he's become and English citizen or not), so there is absolutely no dramatic tension coming from that storyline; and his search for his brother is relegated mainly to the very end of the book, so that doesn't play a huge role in the plot, either.

As for the characters, there's not much to say about them.  They're all pretty boring and they seem to behave either by rote or without motivation.

This book isn't terrible--the writing style is good, it's a quick read, and there are some funny and sweet moments.  Plus Julien and Sarah eventually make it to Paris, which made me go, Yay!  Overall, though, this book is pretty typical.  Another Regency set in London, another brooding aristocratic hero, another virginal heroine, yawn yawn yawn.  I know it sounds jaded, but I've seen it done, and I've seen it done a lot better than this.  The underlying nail in the coffin for me was that I didn't sense any chemistry between the hero and heroine, and their attraction felt manufactured--I would have forgiven the book everything else but that.

I do have to thank Sourcebooks for providing me with an ARC of this novel--I'm sorry I didn't enjoy it more.