After reading (and loving) The Invention of Hugo Cabret, it went without saying that I'd want to watch Hugo, the movie based on it. The film tells the story of Hugo Cabret, an orphan who lives in a train station in Paris. Hugo's only possession is an automaton his father was fixing before he died, and Hugo is convinced that it contains a message from his dad. While trying to fix it, Hugo meets an old toy maker with many secrets, and finds a family.

To begin with the positives: this is an absolutely beautiful movie. The cinematography, set-design, and costumes are gorgeous, and the movie looks like art. It's worth watching just for the visuals alone, and Robert Richardson, Dante Ferretti, and Francesca Lo Schiavo definitely deserved the Oscars they won for cinematography and art direction.

That being said, I think I would have enjoyed this movie a lot more if I hadn't read the book already. Not that it does any injustice to the novel--Hugo actually follows the book pretty closely--but compared to the book it's kind of slow and boring. This is because they added a whole bunch of crap that slows the narrative down to a crawl. It's a good thing I didn't see this in theaters, because if I had, after half an hour I would have been like, "I have to go to the bathhhhhhroooooom."

Of course, when you have great actors playing bit parts, vanity and politesse demand that you pad up their roles so they each have some time in the spotlight, and there are a lot of great character actors in this movie. I'm not saying I didn't enjoy the scenes with the bakery owner and her dachshund, or Sasha Baron Cohen and his crush on the flower girl; just that it would have been better for the pacing of the movie if they'd been cut. It's also clear Scorsese had way too big of a budget for this film (if that's even possible), because he adds scenes literally just for the sake of burning up special effect cash. Don't try to tell me that dream gratuitous dream sequence had any other purpose. 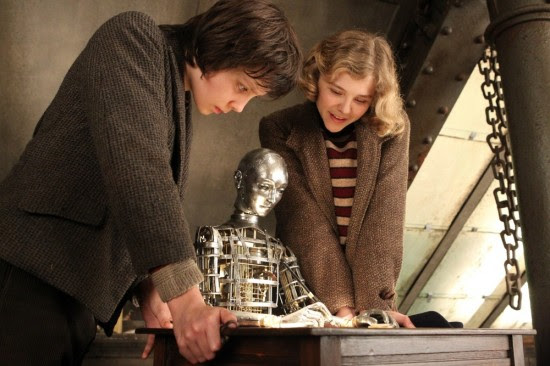 I was also thoroughly annoyed that a convenient plot device character like the station inspector was expanded, while the role of Isabelle was marginalized. In the book, Isabelle is a really bossy, smart, take-charge sort of person, and she saves Hugo from the station inspector. In the movie, she's given a much more passive role. Just to give one example, she dances and giggles around the train station with her friends, while Hugo watches from the walls like the Hunchback du Garre. Just remember, girls, your job is to be an object, even if you're a plucky little object, and it's the guy's job to watch you being it. /sarcasm It's not like I'm surprised or anything, considering this is a Scorsese movie, but it's still damn annoying.

To be fair, the scenes from the book that were absolutely magical were also magical in the movie. I especially enjoyed the part where Hugo and Isabelle finally unlock the automaton. And the ending did give me the warm fuzzies. Overall it's a satisfying, VERY well-made film--there's not a single technical misstep. It's almost mechanical, in fact. I just really wish it had been edited down ruthlessly. And the book's way better.