Marianne isn't happy in Bath, where her father sent her to live while he moved to France to escape her mother's death. Then she receives an invitation to visit Edenbrooke, a country estate, and she jumps at the chance go. More than her family, Marianne misses the country, riding horses, painting landscapes, and twirling. At Edenbrooke, she also meets the handsome Philip--but can she beat off all the other women who are chasing after him, including her own sister?

If I was between ten and twelve years old, I probably would have enjoyed Edenbrooke a lot more. Yes, it's YA, but it's definitely on the Y end. Since I'm a cynical crone who could probably walk the length of the continent on all the romance novels I've read laid end-to-end, however, I found Edenbrooke to be kind of corny--but it redeems itself by being sweet and funny, too.

I really enjoyed the story, which involved plenty of scenes where Marianne gets into trouble and then has to get herself out of it, often with hilarious results. She's definitely a "plucky" heroine and pretty easy to sympathize with.

My main problem with the book had to do with the romance. There were some REALLY REALLY cheesy lines in the novel, let me tell ye. Marianne referred to Philip as "that horrible/insufferable/wicked man!" exclamation mark! so many times I was literally counting them. Insufferable was by far her favorite adjective, by the way. As for Philip, I hesitate to call him a convenient plot device, as it was more like he WAS the plot. Philip does something, and then Marianne reacts. The scenes between them were fun (when he wasn't staring at her and declaring that he was enjoying the view--which he did three times, I should add--or something equally eyeroll-worthy), but I wish he'd had more of a personality. Added to that, it was INSANELY OBVIOUS he was into her. You could tell because he stared at her constantly, he didn't run off in the other direction screaming "Girl coodies!" as soon as she showed up, he got magnificently jealous every time another guy dared to look at her, he watched her sleep (sleeping heroine!), and he was "protective" (that's the Twilight tie-in, in case you were wondering). Yet Marianne remains oblivious. Why? Because if she wasn't, the book would be over? Because she wants to be a nun? 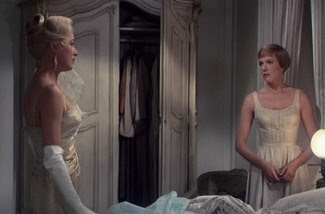 "Come, my dear, we ARE women. Let's not pretend we don't know when a man notices us!"

The story lagged in the middle because I kept waiting for Marianne's sister, Cecily, to show up and ruin everything. Once she did, the emotional angst really took off and the novel became pretty unputdownable. Although I was a little perturbed by Marianne's passive-aggressiveness, I thought the sisters' relationship was really interesting and much more true-to-life than the romance was. Also, there were dances and dastardly deeds done by dastardly doers!

Honestly, though, even if I can't help making fun of the silliness in this book, the ending completely made up for it. It was so much with the warm fuzzies I actually felt not-that-depressed about going to work the next morning. Yay! Even if Edenbrooke isn't the coolest or hippest book on the block, it is very sweet and has a very good heart--if a book can have a heart, and I think this one does. Definitely worth checking out if you're in the mood for something cute and romantic.

Thanks to Pam from Bookalicio.us for sending me a copy!