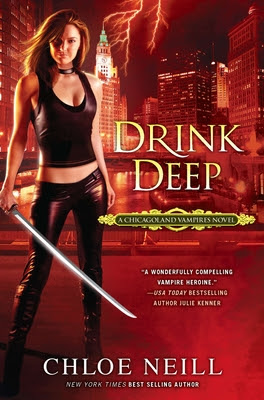 Guess what everybody?! I love Ethan now!

Drink Deep is the fifth book in Chloe Neill's Chicagoland Vampires series. Spoiler-free summary: it's about an English lit grad student called Merit who is turned into a vampire against her will, then has to deal with a whole bunch of supernatural drama. In Drink Deep, Chicago is being threatened by an unknown magical force that's turning Lake Michigan black, the sky red, and so on. Naturally, vampires are being blamed for everything, so Merit rides to the rescue.

After Hard Bitten (review here), like most readers I was hoping for some explanation about wtf just happened??? Because wow, that came out of nowhere. Unfortunately, Drink Deep brought on only more head-scratching. All the things that bugged me about Hard Bitten are present in Drink Deep, only they're magnified by the force of Very Weak Plot. After about fifty pages of long, pointless conversations, the obvious villain being obvious, and endless descriptions of eating, I realized that I either had to DNF this book or skim through it like a mutha. I chose the latter, mainly because I was dying to read the ending.

Here are some patterns I noticed while reading:

As for the ending, I've read other reviews where it was said the reunion between Merit and Ethan felt emotionally distant. I actually disagree with that; I thought Neill did a good job with the emotional aspects of Ethan's return. But it did seem like Ethan came back to life--if you know what I mean--awfully quickly. Like, aren't there tests someone can do? Take his blood pressure? Once again there wasn't much of an explanation for what happened, but everyone seemed to accept Ethan as hunky-dorey and move on. Basically, that feeling of wtf just happened???? Still having it.

Am I going to read the next Chicagoland Vampires book? Of course! I need to find out if Ethan starts hungering for brrrraaaaiiiiiinnnssss. I hope he does.