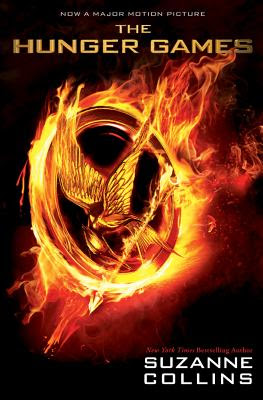 Sixteen-year-old Katniss lives in a post-apocalyptic North America, where every district is required to send two teenagers to participate in the Hunger Games--an annual fight to the death broadcast on live TV. Like Highlander, there can be only one; but unlike Highlander, there are no kilts or Scottish accents. Naturally, Katniss becomes a Hunger Games tribute and has to fight her way through a bunch of people who want to kill her. Is she going to survive?! Considering there are two more books, I'm guessing yes.

Yes, I finally read The Hunger Games. What took me so long? It had mainly to do with the insane popularity of this book, and also because it's the type of thing I wouldn't normally read if it WASN'T popular. I have to say I'm happy I read it, since at last I can finally understand what people are talking about half the time on twitter.

First things: this is a very well-written book, and it only gets better as it goes on. The last quarter of The Hunger Games is especially good, with an interesting twist and lots of action and great emotion from the characters.

That being said, the novel wasn't really what I was expecting. It's billed as a dytopian novel, but Panem doesn't seem THAT bad. There are the Hunger Games, yes--but at least there seems to be racial and gender equality, so that's something! Also, when I think of a dystopian novel, I think of a critique of government or society. While there's definitely some of that in The Hunger Games, mostly it's about a tough-ass chick trying to out-fight or -think her way past mean humans and even meaner animal hybrids, including human-wolf mutants (hulves?), while protecting innocents. So in that respect the book reads more like an urban fantasy than a dystopian novel, and people who like UF will probably love it.

I, however, am notorious for not liking UF. So I had some difficulties. These were only compounded by the fact that I found Katniss to be really annoying, what with the whining about how terrible her life in District 12 is, the sullenness and temper tantrums, and the constant second-guessing of other people's motives.

Thank god for Pita Bread Boy, because he's the only likable character in the entire novel and without him I would have been bored out of my mind. He is WAY too good for Katniss. These two apples have fallen from different trees, and I honestly don't see them as having a future together. It's like when you go to a foreign country and you hang out with people you would never normally would hang out with, just because they speak the same language you do. That's Katniss and Peeta in the Hunger Games.

I'm not sure if I'm going to read Catching Fire or not. On the one hand, I am invested in the Peeta/Katniss storyline at this point (in case you couldn't tell) and want to find out what happens; but on the other hand, sometimes things are better left to the imagination. I'll probably break down and read it because I'm curious like that.

Bottom line: this is a good book, and I liked it; but I couldn't really get into it to the point that I know others have. If you haven't read it, you should, if only to find out what a Haymitch and Cinna are.

Musical notes: "Friends" by Bette Midler. Katniss needs someone to sing this to her.