Review: SILK IS FOR SEDUCTION by Loretta Chase 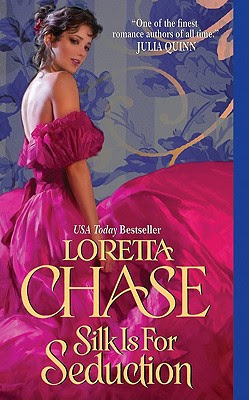 This review may be my Dear John letter to Loretta Chase.

Marcelline Noirot and her three sisters--who remind me of Clotho, Lachesis, and Atropos--want to dress Lady Clara Fairfax, who's promised to marry the Duke of Clevedon. It's sure to be the wedding of the year, if not the decade, and the Noirots know that creating Lady Clara's wedding dress will be a major coup for their new dress shop. So, to accomplish this commission, Marcelline travels to Paris to capture the interest of the still-single duke. BECAUSE THAT TOTALLY MAKES SENSE.

Silk is for Seduction is a hot mess of ridiculousness from start to finish. I'm not one of those people who expects historical accuracy or a strict level of plausibility from novels, but I do think one should be able to buy into the story on some level. Unfortunately, I wasn't able to do that. At all. Let's break it down a bit, shall we?

Premise: Why would you travel to Paris to convince the potential fiance of your desired client that SHE should patronize your establishment? Since when do guys want to be bothered about women's fashion, or women want to be told where to shop by the men-folk? And even if THAT made any sort of sense, how would dressing in gorgeous gowns, following a guy around, deliberately getting his attention and then challenging him NOT be seen as a come-on?

And speaking of traveling to Paris, Marcelline is from there. She speaks perfect French, has lots of glamorous, wealthy friends, and fancies herself the greatest dress designer in the world. Yet she opens her shop in London when it seems like it would be just as easy, if not more so, to open it in Paris, the official fashion capital of Europe??? This is never properly explained. Either you believe you're a great designer and put your lady panties on to play with the big boys, or you believe you're a sub-standard designer who can only sell to those English aristocrats who don't care enough about their appearance to go to Paris to get clothes. Which is it?

Characters: I found Marcelline very difficult to warm up to. She's mercenary and doesn't seem to have regular human emotions. I suppose one could call her pragmatic, but since she hared off to Paris to convince a man to convince a woman to patronize her shop (see nonsense-making, above), it was really hard to interpret her that way. If I pictured her as anything, it was as Mrs. Danvers, and the shop is her Rebecca. Basically she has all the depth of a bit character in a Shakespearean play, and when she did show emotion, it was over so quickly I didn't care.

As for Clevedon, he's a handsome, wealthy duke. Do you really need to know anything else about him? What we are shown of his personality is really inconsistent. He's supposed to be a forceful, brooding, seducer of women and alpha male, yada yada yada, but he doesn't seduce anyone and acts like a goofball half the time (the other half of the time he does make a go at brooding, but it's more like pouting).

I didn't feel any chemistry between these two not-really-characters, and the "love" scenes between them felt more like business transactions. It left an extremely bad taste in my mouth.

Writing style: The writing in Silk is for Seduction isn't bad, but there are some pretty lazy descriptions going around in this book. Clevedon is described as having womanly lips, yet hands that are "larger than was fashionable." Hm, since when is hand size a fashion statement? Or are we not talking about hands but rather "hands"? In which case, when has large NOT been fashionable?

Historical accuracy: What year is this book set in? Does anyone know? For an author who prides--or used to pride--herself on historical accuracy, Silk is for Seduction is just bizarro. It's very unclear as to what time period the novel is set in. The characters talk about typical Regency-era things like Almack's and La Belle Assemblée, yet it's clear this takes place post-Waterloo. How far post-Waterloo is something of a mystery; it probably isn't set in the Victorian era, because they refer to the king and all his mistresses; but the gowns Marcelline design sound closer to an Edwardian style (although it's hard to tell exactly what they look like--see writing style, above). Everything in this novel MAY be historically accurate, but because the descriptions and references are so vague, it's really hard to get a sense of the book being set in a certain time--instead, everything seems fudged up to be historical-ISH. Add to that anachronisms like asking someone if they're stalking you and the "let's be friends" line, and the novel loses all historical credibility.


So there you have it! This may be the last book I read by Chase--it definitely feels like it was phoned in. I also just found the whole thing disturbingly cynical, even though it's supposed to be a romance. What wasn't cynical was so blatantly implausible it was ridiculous. The one plus side: I finally have this book off my shelves.