Review: SCANDAL OF THE YEAR by Laura Lee Guhrke 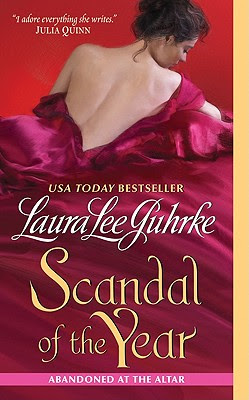 Aidan is an upstanding duke who usually avoids temptation, unless it comes in the form of Julia, or That Woman as he thinks of her. When Julia's hubby catches them in bed together, it leads to a messy scandal that involves Julia getting a divorce and Aidan's fiancee breaking off their engagement. But it's only the beginning of Julia and Aidan's relationship.

Laura Lee Guhrke has written some of my most favorite romance novels of all time, but I've had a difficult time working up interest in her latest releases for some reason. Scandal of the Year is an okay read--certainly better than Silk is for Seduction by Loretta Chase (review here)--but it has some serious pacing issues and there are a lot of anachronisms a copy editor should have caught.

In all honesty, this novel moves reallllllyyy sloooowwwwlly. It put me to sleep a few times, no joke. Usually that's a deal breaker, but what kept me reading were Julia and Aidan. They're both atypical characters for a romance, especially in the beginning of the book. Aidan is a straight-arrow who wants to get married, have children, and settle down. He doesn't really expect romantic love, but he is looking for a woman whom he can respect and share his life with. His plan would probably go well if he wasn't always being bothered by That Woman, aka Julia, who's shamelessly provocative, flighty, and who smokes, drinks, and drives like a maniac. I loved her! She's independent, but not in an emotionless or bitchy way; she just self-identifies as a rebel. I really enjoyed seeing her and Aidan interact and wanted to know how these two crazy kids would get together.

That being said, Scandal of the Year needed a lot more focus. The plot meanders all over the place, which is one of the major reasons why the book feels so slow until the last few chapters, when it suddenly ends. The flashback scenes didn't seem consistent with what we see of the characters in the story, and as I mentioned there are several obvious anachronisms. In one scene Julia describes a woman as "all right" (The Kids Are All Right?) and Aidan tells her, "That is lamest thing I've ever heard." Really, the LAMEST? n00b, u been pwn3d. Check out my awesome LOLcat, rotflmao.

ANYWAY. I read through the entire thing, despite these problems, so that should tell you about how much I enjoy Guhrke's writing. I would have appreciated more social consequences for Aidan and Julia's actions--especially Julia; how can I believe she's a rebel when no one snubs her for defying social conventions?--but it's impossible not to like this book. And at the same time, weirdly difficult to like it that much. I wish Guhrke had followed just one train of thought with Scandal of the Year and focused her energies on heightening the sense of historical place and emotional drama, instead of trying to fit the great characters she created into a more conventional fluffy romance novel format. But there's always next time, right?