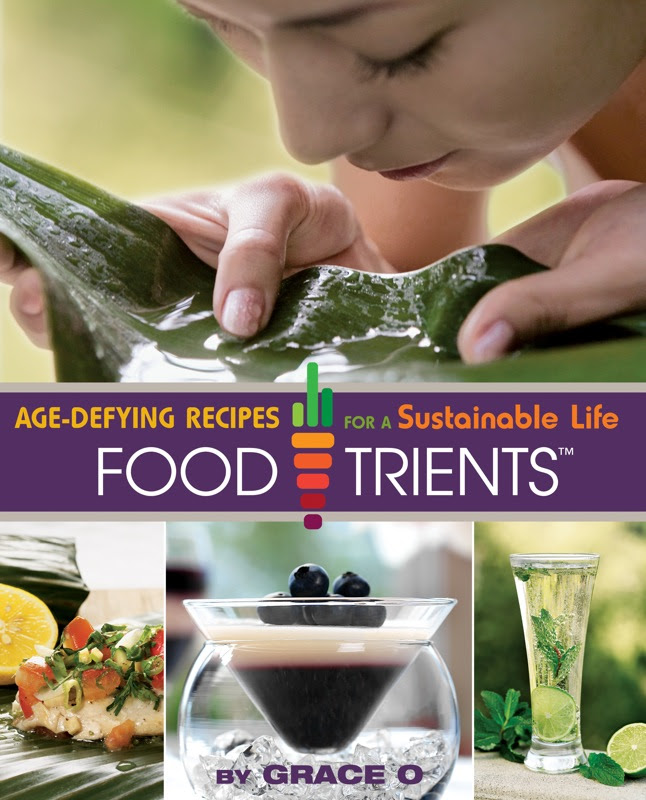 My first thought on seeing this cover was: why is there a woman drinking water from a leaf? Are these recipes for our dystopian future where there's no running water? Because I don't live in a place with that many trees.

Turns out they ARE for our dystopian future. It's the first post-apocalyptic cookbook. Kidding! Or am I? Guess you'll just have to read the book to find out. Or read the other reviews where no one else mentions it.

Anywhosie, FoodTrients is a cookbook that claims to provide recipes that "promote longevity, prevent the diseases of aging, and increase energy and vitality." Basically, if we were living in The Hunger Games, this is the kind of food the people in the Capitol would be eating. And naturally many of the ingredients are exotic or unusual, because let's face it, if the book told you the ingredients in Doritos were preserving your skin, there wouldn't be much reason to buy the book. Or much of anything besides Doritos.

What are some these ingredients? I'm happy you asked. There's a table of them in the back of the book that's honestly the best part of this entire cookbook. But Grace O highlights some more unfamiliar (to me, anyway) foods: bitter melon, moringa, hemp milk, soursop, and chia seeds. I have never heard of most of these ingredients or seen them in my grocery store. I'm just happy when they have kale.

Just as the instructions are sparse, so is the science. I'm not sure I trust any of Grace O's claims as to the benefits of these ingredients or meals--she offers nothing in the way of supporting evidence or citation, and the lack of specificity makes the whole thing feel more like wishful thinking or guestimating. Does Grace O have a degree in any health sciences-related field? It's not mentioned in her bio that she does. She has cooked for royalty, though (see what I mean? Capitol food). I'm not entirely sure where she's getting her information about the healthfulness of these ingredients or exactly how much one has to eat of them to make an appreciable impact. Yeah, red wine's healthy (note: red wine is not listed as one of the "FoodTrients"), but only in certain quantities.

I will say the best part of the book was the "Starter" section. Actually, this was the only section where there were recipes I wanted to try. I made the Quinoa Tabbouleh on Pita:

Ingredients
Directions
I'd never cooked with quinoa before, so this was a bit of an adventure (one thing I learned: buy the pre-rinsed quinoa next time). The recipe itself was okay. I liked how the quinoa was a little crunchy, but the lemon juice was overwhelming. You definitely need something in there to give it flavor, though, or it would be horribly bland. For the most part I thought it was a lot of work for a snack, but if you have some quinoa leftover from another meal this would be a good way to use it up. The recipe is VERY basic, and I noticed that's pretty typical of the dishes in FoodTrients (whole wheat garlic noodles, for example). As one might expect, the recipes focus on ingredients and for the most part have simple cooking techniques.

Overall, however, not many of the recipes in this book sparked a desire in me to make them. Some of the mains looked downright unappetizing, and there were a lot of dishes that I personally wouldn't be able to eat because of my own health issues. I also find the idea of spending the time, money, and energy to import ingredients from far-flung continents for the sole purpose of making me healthier very death-of-the-Roman-Empire, but that's probably just me. If you're interested in working with ingredients such as the ones I mentioned, however, then you'll probably want to check this book out.

Thank you to TLC Book Tours and the publisher for sending me this cookbook to review!