Review: THE HOOKER AND THE HERMIT by LH Cosway and Penny Reid 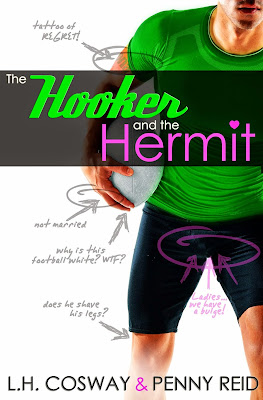 Annie Catrel, secret celebrity blogger and social media expert, loves making fun of stars' poor fashion choices. But when she posts a pic of someone who may or may not be Colin Farrell (he's not), the real celebrity–Irish rugby hooker Ronan Fitzpatrick–blows a gasket and sends her a VERY nasty email. Annie would love to respond by posting it online and publicly shaming him, but she can't. Because he's just hired the PR firm she works for to improve his image, and she's been put in charge of his account. Will Ronan figure out Annie's "the Socialmedialite," and will Annie come out of her shell enough to let him in? #willthesetwocrazykidsgettogether

This review is going to have some mild spoilers. It just is. If you want to read The Hooker and the Hermit completely free of any plot reveals, go and do that, and THEN come back and read my review, okay? I'll wait. Take your time.

Are you back? Okay, let's do this thing.

I have to admit The Hooker and the Hermit had me from the word go because I'm pretty sure Annie's my fictional doppelgänger. This was my mom's face when I told her Annie reminded me of myself (my mom and I occasionally read the same books):

For example, Annie strategically picking a seat next to the exit so she can leave as quickly as possible, if necessary. This is something I do ALL THE TIME. Also: refusing to make eye contact in order to avoid being drawn into conversation with strangers. I wouldn't say I do that all the time, maybe more like 80% of the time, and mostly at Walmart. In any case, I immediately identified with Annie and found her adventures in the first part of The Hooker and the Hermit to be pretty hilarious.

Then I got to the middle of the book and things started falling apart. First of all, I found the fact that Annie let Ronan's mom bully her into breaking up with him–in less than three minutes, no less–irritating. For the past fifty pages these two have been like a couple out of the sweetest, sappiest romcom in history; and then suddenly she walks out on him in the middle of lunch just because his mom, who is CLEARLY trying to manipulate her, throws some shade? Eye roll. You just lost me. THEN, three pages later, Annie's tells Ronan, "Oh, I knew she was just being a bitch and you're nothing like that, but I still think we belong in different worlds and it's better for us to stay apart." Wha-huh? Obvious deus-ex-machina to keep the characters from having sex even though there is no logical reason why they wouldn't at this point is obvious.

Secondly, in the second half of the book Annie's hermit-like ways are treated as a symptom of her psychological problems and fucked up childhood. UHG WHY. I know it brings some dramatic tension to the story, but drawing a correlation between being a hermit and having something be wrong with her was just lazy plotting, in my humble opinion. It reduces that aspect of her personality to little more than a gimmick.

The ending felt like it dragged on interminably and I almost lit my Kindle on fire when I saw there was an epilogue; but for the most part, The Hooker and the Hermit was a very enjoyable, successful collaboration between two authors whose work I really enjoy. I hope Cosway and Reid decide to write another novel together in the future (unless it stars the secondary characters from this novel, that would be annoying).