This year I decided to do something a little different and highlight series or miniseries you can stream through services like Netflix and Amazon Prime, and which you'll want to watch all once like a really long movie. Because sometimes you just need to settle on the couch in your pajamas and binge out. 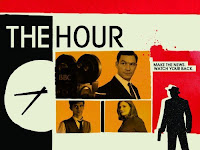 This series is super hip. It's set in 1960s London, and the locations and costumes are to die for. Freddie, an idealistic young journalist, and his bestie, Bel, are hired to create the newest, cutting-edgiest news program on the BBC, The Hour. The only problem is The Hour's host, Hector, knows nothing about journalism and is a terrible interviewer. In between tutoring Hector, Freddie starts digging into government conspiracies and suspects there are people watching his every move.

The Hour perfectly crosses spies, murder, and danger with the personal lives of Hector, Bel, and Freddie. It works because the characters are brilliant. I ADORE Ben Whishaw as Freddie, he is too lovable, but really all the characters are interesting and sympathetic.

And I'm pretty sure there are Christmas scenes in the series. I distinctly remember seeing a Christmas tree of some sort. 20% sure.

Also, like all the series on this list, you can watch The Hour more than once and enjoy it just as much, if not more so, than the first time! The first time I saw The Hour I binged it in one night right before Christmas, or maybe it was Thanksgiving... ANYWAY, I enjoy rewatching it during the holidays.

This series is based on a memoir, but it has the feeling of a new adult serial novel brought to life. Hailey's dream is to play for the New York Symphony Orchestra. When she gets the chance to audition for the Symphony's temperamental and unconventional new conductor, she improbably lands a chair in the oboe section. But it soon turns out her dreams are not so swiftly achieved...

Mozart in the Jungle is a series about following your dreams and being true to yourself that gives us a peek into the unique world of a classical musician. It's hilarious and awesome and, as with all the best NA serials, you CANNOT. STOP. WATCHING. Every person I've talked to who has watched this series finished it in one to two days. Not to mention how fantastic it is to see Bernadette Peters on TV again–LOVE HER.

As for why you should watch it during the holidays, I remember there being a lot of scarves. So I guess it takes place during winter? The second season goes up on Amazon December 30th!

While this series is based on a Marvel comic, it couldn't be more different from shows like The Avengers, Agents of SHIELD, and Super Girl. AND THANK GOD FOR THAT. Jessica Jones used to be a superhero, until something terrible happened to her. Now she barely scrapes by as a hard-drinking PI–that is until one case involving a missing girl blows her world apart, again.

Jessica Jones is a neo-noir that hits all the right notes of grittiness, sex, violence, mystery, redemption (or the lack thereof), and dark humor. Krysten Ritter is perfect as the shell-shocked Jess, and David Tennant...! I mean, I love Kilgrave. Tennant is just soooo good at making him charmingly evil.

There's something about noir and Christmas that just goes together for me; that's why my absolute favorite not-holiday movie is LA Confidential. Jessica Jones is a definitely a worthy entry into that genre. 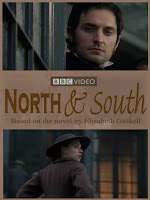 If you haven't watched North & South yet... um, you should get to doing that. Margaret Hale's pleasant life in the south of England is ripped apart when her father abruptly decides his calling is in the northern factory town of Milton. Margaret does not like Milton AT ALL, and she especially doesn't like the rude factory owner, John Thornton. Even though he is SUPER HOT. Anyway, the longer she hangs around the more both start to grow on her.

Sometimes you just need something cozy and historical and romantic to watch, and North & South is the perfect remedy. Yes, the plot is basically ripped from Pride & Prejudice, but idk. I don't mind it. And Richard Armitage... rawr. No one stares after a girl like he does, let me tell ya. The man has a gift.

As for why you should watch this at Christmas, it's really good any time of the year. But Milton is cold. Wintry! My favorite line is when Margaret says, "I believe I have seen hell and it's white, it's snow white." Dontcha just want to sip on a hot cocoa and watch this now?

And last but not least...

When I got a Roku Player for Christmas a few years ago, Scandal was the first series I binge watched on it, so I feel like it needs to be mentioned even if it's not that Christmasy. It's about a Washington DC fixer named Olivia Pope who's a total badass, but it's really a love story between Olivia and the President, Fitz. If you haven't watched the series, I know you're rolling your eyes and thinking, "The President? Really?" because that's what I thought. But this is one of my favorite romantic TV pairings of all time, trust me.

I actually stopped watching Scandal a few seasons back because I felt like it lost the thread of its original plot, but the first two seasons are definitely binge-worthy and must-see. Like you'll watch it, and then you'll find yourself randomly cornering people and demanding to know if they've watched Scandal yet. YOU'LL BECOME OBSESSED. It's the perfect recipe to take your mind off of holiday stress for a few hours.


Check out all the other Virtual Advent 2015 posts at Sprite Writes!