Sunday Snapshot Is Waiting for Santa 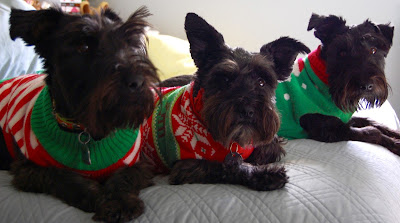 My semi-annual Not-Holiday Movies list, which this year focuses on TV series for you to binge-watch away your holidays. 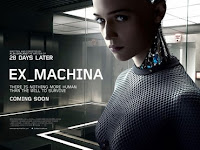 Caleb is thrilled when he wins a week-long visit to the remote home of Nathan, the founder of Google Bluebook, and Caleb's idol. However, Caleb quickly discovers he's not there merely to hang out, but to administer the Turing Test to Nathan's latest AI model, "Ava." Which seems like a really cool project at first, but quickly turns into something of a moral quagmire for our hapless hero.

Anachronist from Portable Pieces of Thought recommended this one, and it was much better than I expected. Caleb was kind of clueless–the helicopter stranding him on a jungle island should have been a giant NOPE; has he never seen Jurassic Park?–and I found it difficult to believe he would fall in love with a computer that quickly. But Ex Machina does tell a good story propelled by ideas on science and technology, and Isaac is pitch-perfect as Nathan. At first I was annoyed with the conclusion of the film, but upon further consideration I think they weren't so much going for the femme fatale angle as showing how "human" Ava had become, and that a machine with high-functioning intelligence can no longer be bound by the Three Laws of Robotics. And just the fact that I spent time thinking about the ending after it was over should tell you a lot about this movie.

The tiny fishing village of Tickle Head, Newfoundland, was once working class proud, but now the aging and diminishing populace survives on welfare. Their only chance at revival lies in attracting a job-creating factory, but to get the factory the town has to have a doctor. Enter Dr. Paul Lewis, who agrees to stay for a month. Will the citizens of Tickle Head be able to seduce him into staying forever?

This movie was okay. Gleeson did a great job as the town's mayor, Murray, and there were some really funny scenes. My favorite was when Paul "caught" a frozen fish. HILARIOUS. I also liked how, in trying to seduce the doctor by being the perfect town, the citizens fell back in love with Tickle Head. But this movie had one big weakness: the doctor in question. He started off as a douchebag, and his character didn't develop significantly over the course of the film. The fact that he remained completely oblivious to Murray's machinations also didn't help: it made him seem like an idiot with his head so far up his own ass he couldn't be bothered to wonder at other people's feelings and decisions. As a result, I found it difficult to believe that Paul would happily settle in Tickle Head, and honestly one would hope the town doctor would have better people skills.

Another movie starring Alicia Vikander! Strange. Anyway, the 1960 spy versions of The Hulk and Batman team up to stop an evil person from launching a nuclear weapon. A girl tags along to yell at them and necessitate rescuing.

Meh. I was expecting this movie to be lighthearted and fun, but it was more like a forgettable Bond film with ADHD. The plot was ridiculous and the characters took everything way too seriously. I can see where Guy Ritchie was going for a style somewhere between The Italian Job and the films of 1960s Italian directors like Sergio Leone and Michelangelo Antonioni, but it came across like Ritchie was trying to make a Steven Soderbergh movie rather than a Guy Ritchie movie. The whole thing was kind of devoid of energy and joy, really, despite all the "antics." When it was over I wanted to rewatch Spy with Melissa McCarthy as an antidote. 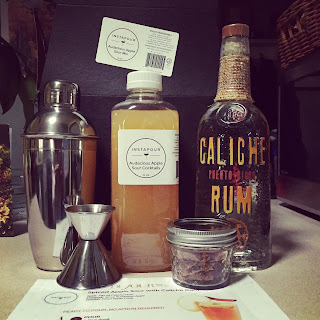 Because it was on sale, I decided to try a new subscription service called Instapour, which promises to send "8 - 16 'ready to pour' gourmet cocktails delivered to your door" monthly. Given that and the product photo, I was expecting ingredients for 8-16 *different* cocktails. What I got instead were the ingredients for many servings of one cocktail, which was something of a disappointment (actually, I wonder if they didn't send me the wrong thing, since this is basically their "Office Happy Hour" box). The cocktail itself–Spiced Apple Sour with Caliche Rum–tasted okay, but it was too sweet, the garnish was gross, and there were a ton of things about it that didn't make sense. Why would you shake this with ice? Just to feel like you're making a cocktail? It would make more sense to serve it hot, or pour over rocks and stir. Less work, too.

Idk, I think Instapour needs to really think about their potential customer. Right now they seem to be going for people who don't enjoy or know how to mix cocktails, but why would you order something like this if you didn't like cocktails already?

There was so much stuff going on this week. My car was in the shop, I was pet sitting, holiday things needed to be done, I had two articles due and was completely indecisive about what write about, and the credit card processing went mysteriously awry on the website I manage, so we couldn't charge or ship to any customers until Friday. But! I made it. Whew!

File this one under things-I-definitely-do-not-need-but-wouldn't-say-no-to: an "easy" method for making clear ice at home, developed by Camper English of Alcademics.

Unfortunately, the Kickstarter campaign was short by about $25,000. I am SHOCKED people didn't want to pledge $90 for this when really you could just use a small cooler.

Still. Would not say no to it.