Sunday Snapshot for the First Weekend in December

I'm kinda in between books at the moment. I started one last night but nodded off a few paragraphs in, so I wouldn't say I'm "currently reading" it yet.

My review of The Kill Artist by Daniel Silva, the first book in the Gabriel Allon series.

A traditional Christmas special in which Bill Murray is bummed because a wicked snowstorm has stopped anyone from coming to his Christmas show. But through random strangers, singing, and the power of tequila, he discovers the true meaning of Christmas. This movie was delightful! Tons of celebrity cameos, great music (including the only version of "Baby It's Cold Outside" that didn't make me want to curse), and awesome locations. My favorite scene was when Murray forced Chris Rock to sing "Do You Hear What I Hear?" HI.LAR.IOUS. George Clooney hiding behind a tree was also pretty funny.

December is upon us, and I have to admit I'm starting to get stressed out about finding presents for everyone. As for decorating, the glass Christmas tree I got in Murano is out of the closet. That's as far as I've gotten, and likely will get. 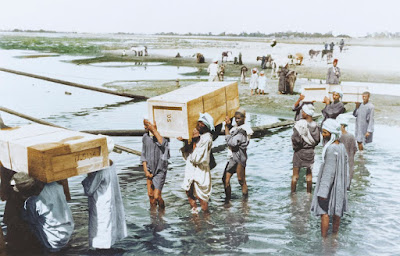 Chances are you've already seen photos of King Tutankhamun's tomb. But recently they've been colorized, and now they're amazing. What a difference color makes!


Have a great week, everyone!