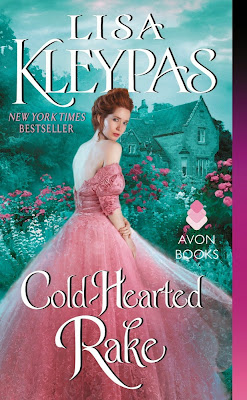 Devon Ravenel is not pleased when he inherits the estate of his cousin, the Earl of Trenear. For one thing, the house itself is falling apart, the estate is mired in debt, and it's not producing enough income to keep it afloat. For another thing, Devon and his brother made a pact as children to never take on any responsibility whatsoever. But when Devon goes to the estate to look into selling it off, he comes across his cousin's widow and despite his best intentions finds himself accepting the burdens of the earldom, most especially those of taking care of Trenear's countess.

Lisa Kleypas is the author whose books got me into romances, so when I heard she was releasing her first historical romance since 2010's Love in the Afternoon, I was pretty durned excited. But also anxious, because historical romance hasn't really been doing anything for me lately. I'm happy to report that while Cold-Hearted Rake wasn't a perfect book, it was fun and entertaining and mostly unputdownable–exactly the type of novel I hope for when I pick up something by Kleypas.

The beginning of Cold-Hearted Rake was a bit rough (side note: the title is annoying and inaccurate. Devon hardly came across as a cold-hearted rake; he was way too fiscally responsible. Also, the term "rake" kinda makes me roll my eyes). The romance between Devon and Kathleen felt predictable and forced, and I think it remained the weakest part of the novel even after it improved.

Fortunately, Devon and Kathleen didn't spend that much time together during the course of the novel, which left plenty of time for the more entertaining stories of Devon's brother, Weston, and the three Ravenel sisters, Pandora, Cassandra, and Helen, getting into hijinks. These are awesome characters, and Kleypas can really tell a great story when she puts her mind to it.

I also suspect Kleypas has been binge watching way too much PBS in recent years, because there's definitely a Masterpiece Classic vibe going on with this series. Devon's attitude reminded me of Matthew's in the first season of Downton Abbey, particularly when Grantham says to him (re: the estate), "You don't love it yet, but you will," and Matthew's like, "ERMERGAWD these people are so backward and stuck in the past and this house is wildly impractical WHY."

But even more than that, Winterbourne (Devon's friend who owns a department store in London) is so obviously modeled after Mouret, the owner of The Ladies' Paradise, or maybe Henry Selfridge from Mr. Selfridge. Either way, he's like, *smolder smolder smolder* *issues* I can't wait to find out what historical miniseries Kleypas rips off in the third book!

Anyway, it was nice to read a historical romance that was a well-told story with fun characters, that didn't bore me to death and I didn't want to set on fire. So the bar's set pretty high over here! Seriously, though, Cold-Hearted Rake isn't Kleypas' best book, but it stands up on its own pretty well. I've already preordered Marrying Winterbourne. CANNOT WAIT.