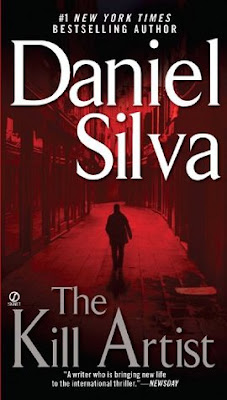 I've been a fan of Daniel Silva's Gabriel Allon series ever since reading The English Girl, and since then I've been making my way–backwards, mind–through the series. I kind of stalled out on The Messenger, but I did really want to read the first Gabriel Allon book, The Kill Artist, out of sheer curiosity. It was a unique experience.

If you've read any of the more recent Allon novels, you know there's a kind of formula to how these stories work: Gabriel Allon, superstar art restorer and retired Israeli assassin, is approached by a spy organization–sometimes Mossad, sometimes not–to take care of a situation ONLY HE can resolve. Reluctantly, Allon agrees. Relying on his vast international network of friends and frenemies, Allon eventually saves the girl and the day.

The Kill Artist is not like that. Oh, Allon is an art restorer dragged into hunting down a terrorist and assassin by his old boss and father figure, Ari Shamron, but that's about where the similarities end.

First of all, the book feels a little dated. The Kill Artist was published in 2000, before September 11th, and it shows. I wouldn't say the terrorists seem quaint, but they're definitely old school, and the attitudes of the spy organizations and the world are completely different. Little things like what we would consider extremely lax airport security, or open borders, really underscores how long ago this book was written. The US is generally dismissive of the possibility of terrorist attacks, and interagency cooperation? You must be kidding.

Secondly, The Kill Artist isn't really about Gabriel Allon at all, it's about the Jewish diaspora in Europe and how it forms its own unique intelligence network. Silva's point seems to be that Israel may be a country, but it's one that represents an entire people of many different nationalities, a huge advantage on the intelligence front.

Finally, Allon is not a hero in The Kill Artist. He doesn't save the girl, he doesn't find the terrorist OR kill him, and his character is not admirable. He's really kind of a useless jerk, actually.

What surprised me most in The Kill Artist were revelations concerning Allon and his first wife, Leah. In every Allon book we learn that Allon's car was bombed in Vienna many years ago, in retaliation for his assassination of members of Black September. Allon was not in the car at the time, but his son and Leah were, and afterward his son died while his wife went mad with grief.


What we learn in The Kill Artist is that shortly before the explosion, Allon slept with one of his field agents, and the reason only Leah and his son were in the car was because she'd stormed out after she found out about it. She was leaving him, in other words (good for her).

A Gabriel Allon who sleeps with another woman he's in love with while his wife is in a mental hospital and can't even remember him is one thing; ishy, but you can't blame the guy. Having casual sex with his coworker in exotic locales while his wife is at home with their kid is whole different deal, one I would not have expected from his character.

As for The Other Woman herself, Sarah Halevy, I found her purpose in the book to be pretty annoying. It makes no sense that she's a famous supermodel because if she is, WOULDN'T PEOPLE RECOGNIZE HER? The only reason for it I could see was to make us feel less bad about Allon sleeping with her. She's the most beautiful supermodel in the world! How could he be expected to pass that up? Riiiiiiiiiight.

Usually by the end of a Gabriel Allon novel, I like and respect his character, but that was impossible to do by the end of The Kill Artist. It's quite a cynical novel, and doesn't exactly sync up with what I've come to know of the main characters. I'm not sure I would recommend it to newbies of the series, but I'm glad I read it.