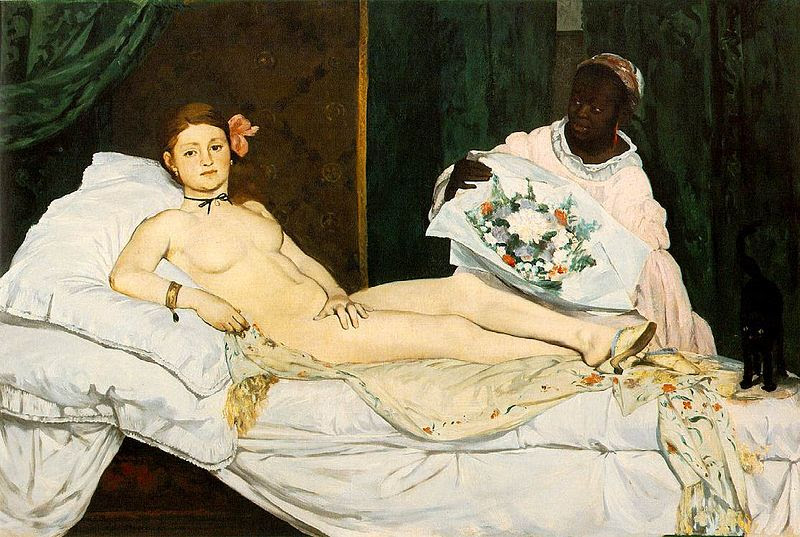 Youandwhosearmy has an interesting post up about failure and how artists fail intentionally.  This made me think of Edouard Manet and his most famous painting, Olympia.

Olympia is one of the landmarks of Modernism.  The critics reviled it, saying the woman looked like a common whore, she was ugly, her hand looked like a spider (it actually kind of does), and that the quality of the work was simply bad.  However, it served as inspiration to the next generation of Modernism giants like Cézanne.

For years it was assumed that Olympia was exactly the way Manet intended--that he painted his Venus the way he did to show truth (as Emile Zola put it), or that he was responding to what Charles Baudelaire had written in A Painter of Modern Life:

If a painter, patient and scrupulous but with only inferior imaginative power, were commissioned to paint a courtesan of today, and, for this purpose, were to get his inspiration (to use the hallowed term) from a courtesan by Titian or Raphael, the odds are that his work would be fraudulent, ambiguous, and difficult to understand. The study of a masterpiece of that date and of that kind will not teach him the carriage, the gaze, the come-hitherishness, or the living representation of one of these creatures that the dictionary of fashion has, in rapid succession, pigeonholed under the coarse or light-hearted rubric of unchaste, kept women, Lorettes.

The latter seemed the most possible, as Manet was a close friend and follower of Baudelaire's, and he did indeed base Olympia off of Titian's Venus of Urbino.  One imagined Manet deliberately taunting the critics and laughing with his other flaneur buddies over the private joke he had fashioned (in fact, this is how most of Manet's famous works are viewed--as giant in-jokes).

A new article at Nineteenth-Century Art Worldwide by Phylis A. Floyd, however, casts a completely different light on the painting.  According to letters Manet wrote, he didn't find the criticisms of Olympia funny at all--in fact, he was shocked, bewildered, and hurt at people's negative reaction to the work.  Floyd argues convincingly that the model for Olympia was not Victorine Meurent, as has always been assumed, but Marguerite Bellanger, the then-mistress to Napoleon III.  Apparently Manet wanted to court the emperor's favor by painting his version of Alexandre Cabanal's The Birth of Venus, which Napoleon III had bought the previous year.  But Manet failed to paint an attractive portrait, and instead was lashed with criticism for the work.

What does this say about Manet and Modernism in general?  Is the basis of Olympia's value as a piece of art in jeopardy if Manet did not intend it to fail as it did?  Because if that is the case--if Manet, the father of Modernism, was simply a bad painter--then that means all of modern painting is not based on clever in-jokes, challenging critics, and failing intentionally, but just on being a craptastic artist!

Manet did want to be one of great artists of his day, like Cabanal.  The only problem was, he couldn't paint like Cabanal.  When he tried to make a grand artistic statement, he usuall failed at it.  Does that make his paintings any less valuable?