If you were to write a book someday, what would it be about?
slavoki

Back in the day, I picked up The Artist's Way by Julia Cameron

at the library.  Very interesting book, although looking back on it I'm not sure if it helped my creativity any.  Anyway, one of the things in that book that really stuck in my mind (or maybe it was the sequel, Vein of Gold

, I can't remember which) was that Cameron had an exercise where you listed your favorite movies.  Then, in the back of the book, there was an index of movies with their dominant themes.  According to Cameron, people are attracted to movies that have themes they tend to think about a lot (DUH); so if you're a writer, you should write about the themes that you find in your favorite films.

So, what is my favorite movie, and what should I write about according to this woman? 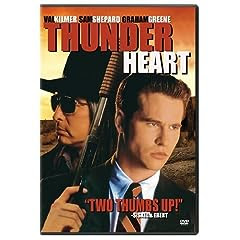 Thunderheart with Val Kilmer is my absolute favorite movie.  It's about a FBI agent who goes to South Dakota to investigate a murder on a reservation.  Coincidentally, the agent is half-Indian (and I'm going to assume he's Oglala Sioux, as well, although I don't think the movie ever says so explicity.  But it might and I just forgot); and despite the fact that the tribe on the reservation is initially wary of the by-the-book "Indian from Washington", he's swiftly accepted due to the influence of an old man who seems to be a sort of shaman for the tribe.

What I love about this movie is that it makes you (or me, at least) believe that magic actually exists.  I also love the landscape in the movie and the idea that Kilmer's character crosses into another world when he enters the reservation.  Futhermore, I love that almost no one in the movie is what they appear to be--Kilmer looks like your average suit when the movie starts out, but by the end he's done a complete one-eighty and accepted his Sioux heritage.  Many other characters undergo a metamorphosis during the course of the movie, too, as does the landscape.


When I initially read this question--If you wrote a book, what would it be about?--my first instinct was to respond with magic, love, and how people are never what they appear to be at first glance.  Shocking how closely that matches up to Thunderheart's plotline!  The movie doesn't have a love story--not even as a subplot--but there is a theme of loving the land and one's heritage that runs through the film, so I suppose that counts.

What would you write about if you wrote a novel today?  Does it match up with your favorite movie?