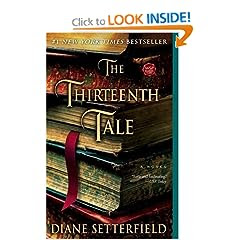 This week I've been reading The Thirteenth Tale

, and let's just say it went in a direction I did not forsee with my super-reader plot lenses. But then, the book doesn't really seem to have a plot, so that's probably why.

In The Thirteenth Tale, there's a story about sibling love that reaches uncomfortable closeness. I'm talking about incest. And there seems to be a whole rash of books that are inundating me with their incestuousness these days. First there was Vampire Knight

, which is a kick-ass manga about vampires and humans who go to the same boarding school. But I suppose I expect subversive wtf stuff from manga, so that one didn't bother me too much. Plus, they're vampires, so it's not like they can have cross-eyed kids, right?

Then I read City of Bones by Cassandra Clare, and yet again there's an incestuous subplot. Of course, they didn't know they were brother and sister; but my mother read the next book in the series and told me that their lurv continues. Like, okayyyy. Maybe if the main character met someone interesting besides her own brother this wouldn't be a problem.

Now The Thirteenth Tale. And a bunch of others, like Flowers in the Attic and The Cement Garden

. So I just have to wonder... why? Is incest the go-to subplot for trashy novels? Is it popular just for the shock factor? Or is there some reason for putting incest in a book other than wanting to make your readers feel like they're watching a train wreck?

I have never been a fan of the incest thing. To me it smacks of desperation on the part of an author wanting make things in interesting. Plus, it just seems completely unrealistic. First cousins is one thing, but brother and sister? Come on. I'm not saying it's never happened, but if you're going to put it in a book, you better spend some time setting it up so it's believable.

Have you read any books with incest in them recently? Have any sub-plots that you really can't stomach?
at 2:57 AM