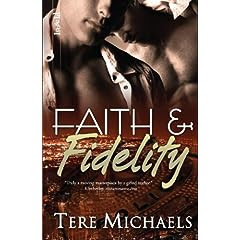 First of all, let me say that I do not review books I don't finish. Ergo, this is NOT a review. Mkay?

Evan is a detective who lost his wife in a car accident. Matt is a former detective now working in security. When they meet at a retirement party, both feel a connection--in that neither of them are not happy people. They exchange numbers and are soon meeting for drinks. Suddenly, Matt finds himself sexually attracted to Evan. This is strange because Matt has only been attracted to women his entire life. But what the hey--Matt's lonely, Evan's lonely. Bow-she-bow-wow.

Here is my major problem with this book: I grew up around cops. I work with ex-cops, ex-MP's, and law enforcement everyday. So I knows me some cops. And there is no way in hell two heterosexual cops would ever behave this way. I'm not saying two cops would never find themselves attracted to one another; but the idea that they would 1. acknowledge said attraction, 2. further pursue said attraction, and 3. act on the attraction, and not freak the hell out like Natalie Wood in Splendor in the Grass, is quite honestly ridiculous to me.

Last week I reviewed Fatal Shadows by Josh Lanyon, which also has a (male) cop character who finds himself unexpectedly attracted to men. Does he acknowledge to himself that this makes him a homosexual? No. Would he rather die than have the other men on the force find out? Yes. As he says, it's worth his life to keep other people from finding out about it. And I'm sure in his mind it is. Cops tend to see things in black and white, right and wrong. So the detective's reaction in Fatal Shadows is much more believable to me than either Matt's or Evan's in Faith & Fidelity.

Other than that, the writing was decent. I felt like it could have been a touching story about two guys helping each other through difficult times in their lives--if not for the fact that the author forced them into a homosexual relationship. Am I the only one creeped out by this idea that everything in life has to be sexual? Is nothing safe?