Harry Potter and the Kid Who Cried Wolf 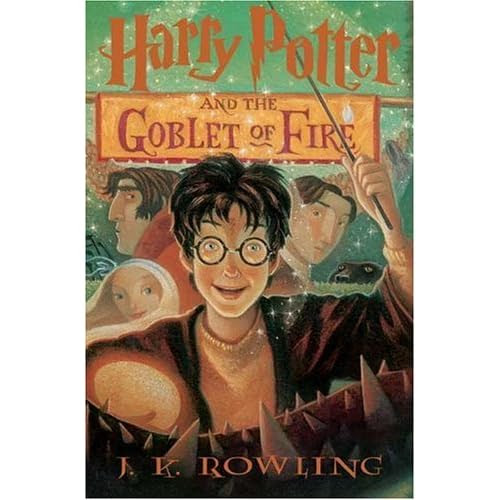 Harry Potter and the Goblet of Fire by JK Rowling

I remember the first time I read Harry Potter and the Goblet of Fire very clearly.  It was one of the few times in my life that my heart actually pounded while I read a book--out of pure excitement and sympathy with the main character.  It was completely un-put-downable (I read all 700-ish pages in a single day), and the ending totally blew me away.  In other words, this is the book that turned me into a Harry Potter fan girl.

There's a theme running through Goblet of people who keep crying wolf and, as a result, no one ever believes them.  Mad Eye Moody is a perfect example, as is Harry himself.  Whether or not they've actually spotted danger seems incidental; just the fact that they are the ones that things happen to, and that point out the danger, is enough to make people brush them off and ignore them.  If there's one lesson in Goblet, it's that danger doesn't come from expected quarters or while you're watching for it.  Mad Eye Moody might preach constant vigilance (one of my favorite lines evar, btw), but people neither want to be, nor can they be, keen to every threat.

By the end of the novel, it's clear that illusion of safety is more important in most cases than actual security--but then no one can really provide safety, can they?  The people from the ministry go through a lot of trouble to make sure the participants of the Triwizard Tournament are "safe," but fail miserably every step of the way.  And some things meant to keep people safe, like the Dementors, are akin to making a deal with the devil.

When I mentioned I was reading Goblet on Twitter, Amanda from The Zen Leaf said she didn't enjoy it any more because of all the holes in the plot.  Me:  Holes in the plot?!?  I didn't notice any holes!  So, naturally, this made me look for the holes while I was reading.  And, I have to say Amanda was right; there are tons of plot holes littering Goblet.  The one that bothered me most had to do with Harry's placement in the Goblet of Fire itself--so, just to review, anyone can write down anyone else's name and put it into the Goblet, and the person would then be bound by a magical contract, even though they had nothing to do with signing up for the Triwizard Tournament?  That seems like a rather HUGE loophole in proceedings.  So, if that's the case, an older student could have just written a younger student's name down and dropped it in the cup?  Wouldn't you think that kind of issue would have come up before????

I didn't enjoy Goblet quite as much the second time around, but I did like listening to it on audio, which seems to be getting better and better as the books go along.  If there was a book I wish I could re-read as if it was the first time, this one would be it--it's just not as much fun when you know what the ending is going to be.  But it's still a good (if holey) story.

"He said my blood would make him stronger than if he'd used someone else's," Harry told Dumbledore.  "He said the protection my--my mother left in me--he'd have it, too.  And he was right.  He could touch me without hurting himself; he touched my face."  For a fleeting instant, Harry thought he saw something like a gleam of triumph in Dumbledore's eyes; but the next second, Harry was sure he had imagined it....

WHAT THE HELL????  A gleam of triumph?  Dumbledoor is soooo in league with Voldemort.  I bet he had a secret affair with Voldy at some point, and that's why they hate each other so much.

I listened to the audio and read this book as part of Galleysmith's fab Harry Potter Reading Challenge.

*I got the audiobook from the library, and the book from my brother.  So no one's getting nothing, FTC.  Take that and shove it up your %&@^.