The Dickens With Love

The Dickens With Love by Josh Lanyon

This was the perfect book to start off my m/m reading month--it was a light, fun, enjoyable read.  But it wasn't so great that another book this month won't possibly be able to top it.

Within the first few pages of The Dickens With Love, we know several important pieces of information--it's Christmas time in LA; the narrator, James Winter, has been hired by the sketchy Mr. Stephanopoulos to acquire a unique edition of Dickens for him; and James Winter is a snarky, sharp bibliophile.  Oh, and he's gay (that's page four).

James is really the best thing about this novel (which is a good thing, since it's told entirely from his point of view).  He's intelligent, witty, and seems to spend most of his time swilling brandy.  And, despite the fact that I sort of whined about every main character being a reader in a post a few weeks ago, I loved how James was completely addicted to books.  "Books are what I know.  Books are all I know," he says at one point; and that is definitely appropriate to the plot of the story, which involves a one-of-kind edition of a Dickens' Christmas story.  James is a down-on-his-luck book appraiser who used to be all that, but now works 20 hours a week at Barnes and Noble and hates it.  He needs the commission from Stephanopolous in order to pay his rent, but an affair with the owner of the book, Professor Sedgwick Crisparkle, gets in the way of all his plans.

Unfortunately, the weak point of The Dickens With Love was the romance.  Granted, I've never been a fan of the they-have-sex-and-then-they-fall-in-love plotline; but Sedgwick seemed totally boring and lacking in personality.  I can see what Sedg sees in James, but why James was going gaga over Professor Fizzlewizzle was something of a mystery to me.  Plus, there were a lot of holes in the plot--and since there isn't much in the way of plot in this story, the holes were hard to ignore.  The biggest one that still gets me is why Sedgwick is spending Christmas in Los Angeles if he's English and his entire family--whom he's supposedly very close to--is in England?  I've been overseas without my family during major holidays, and trust me, it's tough.  Sedg couldn't wait until the week after Christmas to sell his book?  Or the week before?  It simply makes no sense.

Despite all its flaws, though, The Dickens With Love is a truly fun, enjoyable read.  It actually reminded me a lot of the Vicky Bliss mysteries by Elizabeth Peters

, which I was addicted to when I was a teenager; it has the same level of smartness and humor, and to be honest I kept expecting it to turn into a mystery (didn't happen).  Lanyon is definitely a skilled author, and I do plan on reading his backlist. 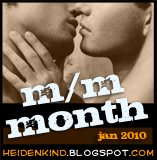 Going into this book, I had two questions:  one, would I enjoy reading it on an e-reader; and two, would there be any noticable difference between m/m romance and traditional m/f romance?

The answer to the latter question is not really, although I did find it refreshing to finally read about a main character that doesn't subliminate or deflect the attraction s/he feels for someone else.  When James first meets Crisparkle, he's friendly and chatty, displaying "uncharacteristic cordiality."  In other words he actually flirts with someone he finds attractive.  What a concept!  Most female characters in that situation would have either ignored their attraction for no reason, or ignored it because they thought the hero was a jerk.  I just find it interesting that apparently males are still allowed to be more sexually agressive than females, even when said male is the "submissive" in the relationship.

As for reading on an e-reader--maybe I was just really excited to be using my new toy, but I found it a lot easier to use the e-reader instead of an actual book.  It seemed like I read faster on it.  And it was much easier to read at the table because I didn't have to find a way to keep my book open (always important).

So far I'm feeling pretty positive about my new e-reader and the theme for this month.  I think if the rest of the books I've downloaded are up to the standard Lanyon's set, I'll be in very good shape.