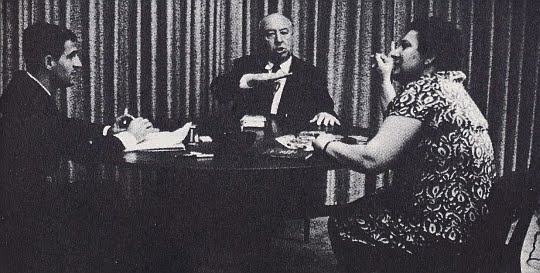 In 1962, François Truffaut sat down with Alfred Hitchcock for hours upon hours to discuss Hitchcock's entire oeuvre. Truffaut was a filmmaker himself, and a total Hitchcock fanboy. The tapes where edited and broadcast on French radio (you can listen to them here), and turned into this book. Truffaut's interview with Hitchcock is now one of the most cited sources in books about Hitchcock, and for good reason: the director is astonishingly blunt and honest about his process and philosophy of filmmaking.

I ordered this book at the library because I was doing a paper on Hitchcock, but having difficulty finding the sorts of books and articles I needed. The lovely Colette from A Buckeye Girl Reads helped me out by tweeting for suggestions, and a few people recommended this. I'm very glad they did because it's not only a good resource, but a great read!

You wouldn't expect a book that's really a giant interview to be interesting, but Hitchcock is. For one thing, Hitchcock and Truffaut aren't just conducting an interview, but having a conversation about the nature of film and directing (you get an even greater sense of this in the tapes). At one point, Hitchcock asks Truffaut, "What's your opinion?" One gets the idea that Hitchcock is as open as he is because he respects Truffaut as a director.

Another thing that makes this book great is of course Hitchcock himself. I have to say, I was surprised by how inspirational I found this book to be as a whole. I don't think anyone would argue today that Hitchcock was a great artist, but that doesn't mean he started out as a film genius or never made mistakes, and he's completely up-front about admitting that. The important thing was he kept going--he kept making films, he kept trying new things, or going back to old methods when the new ones didn't work. I have great respect for Hitchcock after reading this book, not just as a director but as a creative person who could at any time have been defeated by self-doubt.

One of the things I found really interesting was what Hitchcock says about critics--not just because this a book blog that reviews books, but because Truffaut was himself a critic before he became a director, and he was realllly critical. He was so harsh, in fact, that he was banned from the Cannes Film Festival! Yet as soon as the subject of critics comes up, both Hitchcock and Truffaut start dumping on them. Here's an good bit (which I edited to make more good):

TRUFFAUT     It's sometimes said that a critic, by the very nature of his work, is unimaginative, and in a way, that makes sense, since imagination may be a deterrent to his objectivity. Anyway, that lack of imagination might account for a predilection for films that are close to real life....

HITCHCOCK     By the way, since we're being so critical of the critics, what line were you in when we met for the first time?

TRUFFAUT     I was a film critic. What else?

HITCHCOCK     I thought so.

Some magazines deliberately select critics who don't care about films, but are able to write about them in a condescending way that will amuse the readers. There's an American expression; when something's no good, they say, "It's for the birds!" So I pretty much knew what to expect when The Birds opened.

Basically, Truffaut and Hitchcock's frustration with critics stems from the fact that they approach movies not as a entertainment, but as a subject for their own ideas. I couldn't help but wonder if the same is true of my own reviews... I might as well admit that it is, although I don't make any of the claims to objectivity that Truffaut suggests.

But then I started thinking about this in regards to book blogs: bloggers review books (for the most part) because they love them and want to write about them, not because someone hired them to write and they may or may not like movies books. So does that make blog reviews different from print reviews?

I don't think so. It might seem ironic, particularly considering my current major, but I think a great work of art stands on its own no matter what people write about it. Yes, reviews and essays can enhance a person's understanding of it, or promote it, but ultimately the only thing that matters is the work of art itself, whether it's a painting or a movie or a book.

In any case, there's a lot of great ideas in this book and interesting conversation, and I'd recommend it for anyone interested in film.