Book Review: THE PERILOUS PROPHECY OF GUARD AND GODDESS by Leanna Renee Hieber 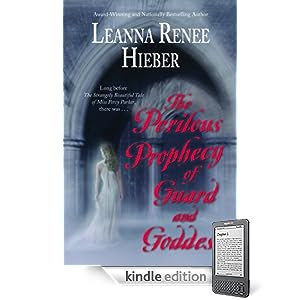 Something you should know about me: I hate prologues. Like I don't read them. Ever. Begin the story at the beginning, please. So it probably shouldn't come as any surprise that I hard time getting into Perilous Prophecy of Guard and Goddess, despite the fact that I love Hieber's writing and this series in general.

Perilous Prophecy is a prequel to the last two Guard books. In those novels, a reincarnation of the goddess Persephone helps a group called the Guard close the door between the Whisper World and the mortal world. For the most part, this book follows the Guard previous to the one we're familiar with, which was formed in Cairo, and gives us a more thorough understanding of the Goddess prior to her reincarnation.

At first I was excited about this, because the setting offers a ton of interesting venues for adventure. Tombs have got to be filled with ghosts, right?? And Beatrice's (the Cairo Guard's Leader) dad is even an archaeologist! But aside from one notable exception (which is one of the better scenes in the book), the setting wasn't really taken advantage of and the transition between mortal and Guard seemed fairly easy for these characters. They don't even have to explain things to their family, who are under some sort of spell to just accept whatever they're told. So no dramaz there, my friends! Then it's decided they have to go to London, and the book starts to rehash things we already know from the previous two books.

In other words, I'm not sure what the point of this book was...? Don't get me wrong, Hieber's style is as good as ever; but as far as the story's concerned, we're not shown anything new. And for some of the scenes I really wish I had been allowed to just imagine them. Of course I'm always happy to read about Alexi and the rest of the London Guard, but the scenes in which they appeared didn't really add anything to my understanding of their characters. We found out why Alexi wears a red cravat and where he got his feather ring from, and that's about it. Also, I struggled with the age Alexi was in this book--he's what, 16 or 17? He doesn't act like it. He acts like grown-up Alexi, and it was really frustrating for me. I hate it when kid characters in books and movies act too much like adults.

Aside from that, there were a hella lot of annoying characters in this novel. My big two were Ibrahim and the Goddess. Pardon me while my blood pressure rises.

Ibrahim  Okay, what is this dude's damage?!? 1. Stop whining about shit, you're not the only person with problems; and 2. man up for God's sake. Why on earth does Beatrice even find him remotely attractive? When he's not being boring, he's telling people not to do things because they're "dangerous." Okie dokie, Mom, thanks for the heads up!

Goddess  This one surprised me, because I really like Percy, the Goddess' mortal incarnation, in the other books. But the Goddess herself was a bitch! And not even a fun bitch, either, one of those passive-aggressive types. The Goddess is always going on and on about how she lost her true love, yada yada, don't really care. Erm, hello, but have you noticed the totally awesome Darkness that's super-devoted to you? Okay, so you were taken into the Whisper World against your will, but maybe you could make the best of it??? Because Darkness was pretty hawt. PS, the world doesn't revolve around you and you have no redeeming qualities-love, me. Again, I have to wonder what anyone sees in this "woman" other than sparkly rainbows--she just seemed very immature and selfish.


So, yeah, I wasn't too wild about this book. It did get considerably better in the second half, but by then I was too frustrated to enjoy it. I do, however, look forward to reading Hieber's next novel.