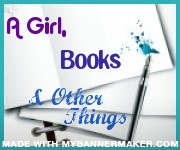 For Armchair BEA, I'm lucky to have Alex (aka AnimeGirl) from A Girl, Books, and Other Things as my interview partner! I hadn't visited Alex's blog before, so I was excited to learn more about it.

Tasha: I've noticed you've been reading a lot of Sarah Dessen books lately (for Sarah Dessen Week). If you could have a picnic with Dessen and one other author, who would it be?

Alex: I think it would probably be Meg Cabot since I adore her and I've been such a fan girl of her for ages!

Tasha: What is your favorite animé series?

Alex: Well, this is going to be long. Of My childhood: Magic Knight Rayearth - my first and biggest anime crush ever is in there!. Of my teens: Card Captor Sakura. Of my college years: tie between UltraManiac and Ouran High School Host Club.

Tasha: Do you usually read a manga before or after (or at all) you watch an animé series?

Alex: I actually don't read Manga all that much unless is an author I love like CLAMP or Wataru Yoshizumi. Otherwise, it's usually the anime first manga second.

Tasha: You read a lot of different genres. Is there a single theme running through all of the books you read that attracts you--i.e., romance, friendship, etc.?

Tasha: Is there a genre that you refuse to read?

Alex: In general terms, vampires. Also, I'm not really big into Sci Fi and Fantasy (though I've been known to read fantasy when it comes well recommended). I don't usually do Epic, or thrillers/mysteries because I'm not a very patient person.

Tasha: If you could travel to just one place in your lifetime that you haven't been before, where would you go?

Alex: London, probably. I think it's part of my obsession with historical romance, most of which is set in London/somewhere in England.

Tasha: What's one book you've always wanted to read but haven't gotten around to?

Alex: I tend to be very single minded when I want to read something and don't stop till I read it, and I used to read a lot of classics as a kid, but I would say Heart of Darkness by Joseph Conrad if I had to name one.

Tasha: What was your favorite book when you were 10 years old?

Alex: Oscar Wilde's Complete Works (see, classics). I read it for the first time when I was 9, and I remained obsessed with it for years. Particularly, Canterville's Ghost, and Lady Windemere's Fan.

Tasha: What do you think is the best book-to-movie adaptation ever?

Alex: The Secret Garden, and Cuaron's version of The Little Princess. For mini-series: the newest BBC Sense and Sensibility, and, of course, Pride and Prejudice.

Tasha: What in your opinion is the most over-used trope in YA novels?

Alex: Trope as in shtick? Love triangle. And I bloody hate me some love triangles... lol, it has be exceptionally well done for me to stomach it, usually I just can't. Plus, I tend to pick the other guy ALWAYS (Hell, I picked Bois Gilbert over Ivanhoe in IVANHOE!)

Thanks so much, Alex! I never could understand why Rebecca chose Ivanhoe over Sir Brian, either.

To check out Alex interviewing me, go to her blog, A Girl, Books, and Other Things!