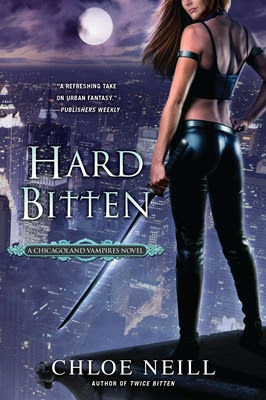 In book four of the Chicagoland Vampires series, Cadogan House and its fearless leader, Ethan Sullivan, are under threat from politicians local and abroad: Mayor Tate is threatening to arrest Ethan if he doesn't put a stop to dangerous blood raves, and the Greenwich Presidium (kind of like the vampire UN) wants him to mind his own biznas or they're going to take over his House. With Ethan stuck between a rock and a not-so-comfy place, it's Merit to the rescue, hitting the streets of Chi-town in search of raves, drug dealers, and her arch-nem, Celina. Unfortunately, Merit forgot to bring along the little grey cells, so things aren't going so well!

The first half of the book was pretty boring. Nothing happens and I think Merit spends like eighty pages driving around Chicago and talking on her cell phone--that's what it felt like, anyway. Also, there are very drawn-out scenes involving food, which don't seem to have a point. Then she goes to a rave and the plot starts picking up, but the sense making does not.

Here's the thing: there are a lot of convenient plot device (CPD) moments in this book, most of which involve the characters acting inconsistently. Merit's supposed to be really smart, and she has been in the previous books, but in this one she bumbles into offices with no plan, talks without thinking, doesn't listen to her instincts, and generally acts like a dope; and all of this inevitably contributes to the conclusion of the book. Merit's not the only one suffering from alien body syndrome, either: in Twice Bitten, she and Ethan slept together, but then he was like, "Office romance is bad news, babe," and she was all, "NEVER TOUCH ME AGAIN." In Hard Bitten, Ethan wants Merit back, I'm not sure why exactly; and in the interim he's somehow gone through a total personality makeover, where he's not a snobby prig and is actually... um, kinda nice. And sweet. *chokes* Even Merit thinks at some point, "Maybe people can change." Um. Maybe. But probably not people as old as Ethan is. And probably not that much. Did he take a Male Sensitivity in the 21st Century class or what?

Then there's Mayor Tate, who acts like a character straight out of a Spiderman comic; Morgan, who betrays Merit's trust for no clear reason; Celina, who is definitely out of character; Jonah, who conveniently develops the hots for Merit; Paulie, who is ridiculously forth-coming... need I go on?

Now, you all know I'm not a fan of Ethan (see this post, and this one, and also this one), so I'm not against Merit having another romantic interest (Team Morgan! The scene where he took his shirt of=priceless), but the ending of this book took me completely aback because there was absolutely zero set-up. There wasn't even foreshadowing! For four books I saw this series as heading in more or less a certain direction, but now I have no idea. And as a reader, I don't like feeling left out to sea with no idea where a story is going.

What Chloe Neill did at the end of this novel was very gutsy, and I commend her for that. But things like this require at least a little set-up, or your audience gets angry and stops trusting you as a story-teller. On the plus side, I still want to find out why things happened the way they did, and hopefully the next book, Drink Deep, will answer a few--or more than few--questions.