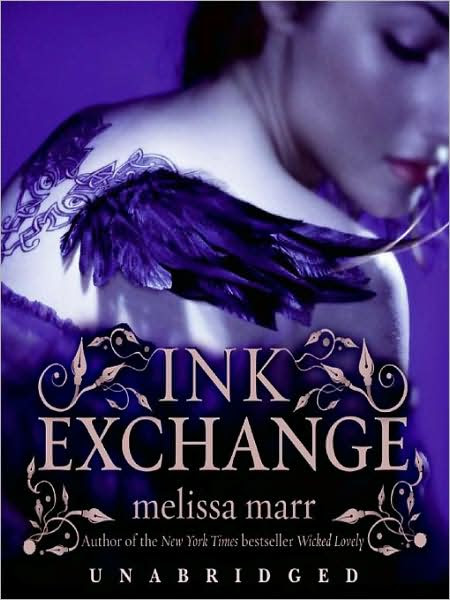 Leslie appeared briefly as one of Aislinn's friends in Wicked Lovely; unbeknownst to Aislinn or any of her other friends at the time, Les' life is nightmare. Basically abandoned by her father and working to keep a roof over her head, her addict brother occasionally drugs her and then pimps her out to his friends. To gain some control over life, Les decides to get a tattoo. Unfortunately, said tattoo is actually a magic spell that ties her to Irial, the king of the faeries' Dark Court.

As with Wicked Lovely, in Ink Exchange, Melissa Marr takes familiar tropes of teen paranormal romance and switches them up. Irial is the handsome and dangerous Dark King who isn't all bad; he cares for Leslie as he wouldn't for any other mortal, feels her emotions, and wants her to be happy. He promises to give Les everything she ever wanted: love, a place to belong, protection, revenge against the men who raped her, and above all mind bleach to take away the fear that's defined her life for months. "Only Irial makes it all better," Les says at one point. Yet Irial is not in any way the romantic hero of the story the way, say, Edward Cullen would be. For one thing, from the beginning of the novel a correspondence is drawn between Irial and Les' brother, Ren--they both use her for their own ends and take away her choices. For another, the narrator of the book (I listened to this on audiobook) makes Irial sound ridiculously sleazy. It's hard to imagine Les actually being attracted to this creepzoid if it wasn't for her tattoo.

Then there's Niall, another fae who is the Summer King's advisor and was also in Wicked Lovely (he was the funny one). Despite the fact that Niall is now part of the Summer Court, he was once a member of the Dark Court and v e r y close to Irial. Their relationship definitely contains homoerotic overtones ("He saw the dark passion in Irial's eyes," they kiss, Irial spends centuries waiting for him, I could go on). Despite the fact that Niall talks like an escapee from a Renaissance fair ("Come! Let us go to the club."), Leslie thinks he's a normal human and is deeply attracted to him. But then of course she is--Niall is addictive to humans, which is why he generally stays away from them. But he can't stay away from Leslie! Is it true love?

It's impossible not to root for Niall, who is totally likeable and has been ever since Wicked Lovely; but even though he seems like better hero material than Irial times a thousand, there really is no difference between him and the Dark King other than the fact that Niall resists the dark side of himself. At least, he does until he can't. Although he knows it's wrong and Leslie's response to him is dependent on his fae nature, her own attraction to the dark court and connection to Irial are too irresistible for him.

With two guys after her, both of whom are essentially bad news, it seems like Leslie is screwed no matter what happens. Yet somehow the tables get turned on our two would-be heroes. Les frees herself and escapes, apparently unscathed, into a normal human life, while Niall and Irial's lives are upended even as they continue to revolve around Les. Niall especially gets the short end of the stick at the ending, and one has to wonder why. Like Les, Niall was used and victimized by those he trusted, and like her, he left the Dark Court because of it. But if Niall can't deny his "true nature," the part of himself that was attracted to the dark to begin with, can Les? She was the one who initially demanded Irial's tattoo, after all. Will she eventually be unable to deny the attraction of the Dark Court like Niall? Or is the very fact that she's able to make choices for herself in a way Niall and Irial can't the element that attracts them to her?

I wouldn't call Ink Exchange a romance at all, really, but it does tell a great story and takes a deeper look at these sorts of relationships than your average YA novel. I definitely recommend this series!

Musical Notes: "Your Love Is My Drug," by Ke$ha