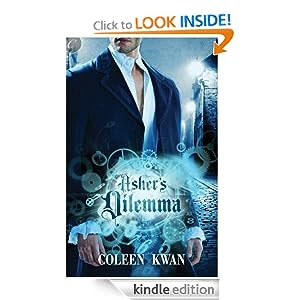 Asher Quigley is a scientist who has created a time machine--I'm sorry, "chronometrical conveyance." After he drops something on it, he's accidentally transported back eight months, where he realizes his true love's existence is about to be erased! Can Future Asher convince Past Asher to destroy the chronometrical conveyance and save Minerva's life?

Even though I'm about to complain about it, Asher's Dilemma was okay. Someone who wasn't me might enjoy it more than I did; but then again, maybe Future Me would dislike it more than I did, especially after reading this review. You just never know! In any case, it started off as funny, although I have my doubts the parts I found funny were meant to be so. Then it turned into a slog and I HATED the ending.

The steampunk element was definitely there--not just in the inventions but also in the descriptions and the characters. For example, Mrs. Nemo (there's a subtle reference for you) was described as having "tuberose" perfume and a boneless way of moving. Um, ew. This would be cool if Mrs. Nemo had something else going on for her, but instead she came off as kind of cartoonish.

I was also expecting more wibbly-wobbly timey-wimey stuff. As the Doctor says, time is non-linear and non-subjective, and Asher's Dilemma was too little of both. Plus I found the interactions between Future Asher and Past Asher very unrealistic. If I met myself, I would probably find myself really annoying. I agree with Seinfeld on that one. Instead, Future Asher seemed to almost be crushing on Past Asher, which was SUPER awkward.

As for Minerva--UHG. At first she seemed kind of cool because her job was creating artificial limbs, but as Asher's Dilemma went on, I wondered if the "dilemma" was what do with Minerva, as she was definitely becoming TSTL. And isn't it kind of suspicious both her parents are crazy pants? By the end I didn't care if she was erased from existence or not. Actually I didn't care if ANY of these characters were erased from existence.

Still, I would have been more forgiving of all of this if Asher's Dilemma was a quick read (at less than 100 pages, one would think it would be), but instead it felt like it went on and on and ON. I think the denouement takes up twenty percent of the book; that's what it felt like, anyway. It either needed to be a lot shorter to speed up the pace of the story, or a lot longer to build a more complicated storyline and deeper attachment to the characters.

In any case, as I stated earlier, it was okay. I heard there was a prequel to Asher's Dilemma; maybe if I'd read that I'd have been more invested in the outcome.