Turn of the Century Salon 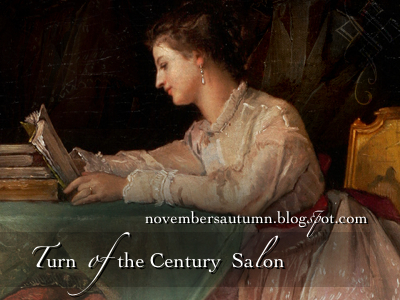 I just heard this morning from Becca at Lost In Books about a Turn of the Century Salon (kind of like The Sunday Salon, but about novels published between 1880-1930) hosted at November's Autumn. Naturally I can't pass up the opportunity to participate and I hope you will, too. Not pass on it, I mean.

ANYwhoooo, the opening month of January has some questions for participants to use to introduce themselves. Hi, my name is Tasha and...

I manage a classics book blog (called The Project Gutenberg Project), so a lot. Listing every book I've read from the turn of the century would be too much, but here are some highlights from last year:

Wow, that's way too many novels. Sorry, went a little overboard there. Let's move on to another question, shall we?

Which authors do you love?

So far my favorite turn-of-the century authors are Mary Roberts Rinehart, Rafael Sabatini, and Anthony Hope. And I guess Anna Katharine Green, since I keep reading her even though I think her books are CRAZY. If you have recommendations based on that, let me know!

Which authors do you hope to learn more about?

This year I'm planning to read Joseph Vance by William de Morgan (on Melody's recommendation), and I'd like to read more classic mysteries (that's my thing). I'd really like to learn more about/read more books by Mary Roberts Rinehart, Dorothy L. Sayers, Agatha Christie, Rafael Sabatini, Anthony Hope, and I'd like to read books by more female writers in general.

I am definitely looking forward to this salon and learning more from the other bloggers participating!