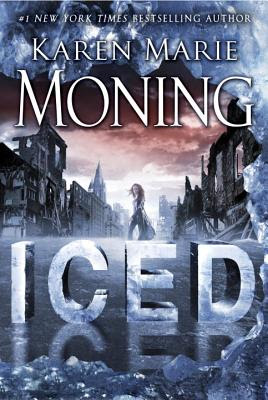 It's the Ryodan Show! Welcome to the Ryodan Show, where the world revolves around Ryodan, the most interesting man in the world. Ryodan knows mostly everything, but there's one thing he doesn't know: who, how, what, and why is freezing Unseelie in his club. For some reason he thinks Dani Mega O'Malley, a fourteen-year-old who fancies herself a superhero[ine], will be able to help him figure it out.

I was kind of excited about Iced, the first novel in a new series that takes place in the same world as the Fever series, Karen Marie Moning's über-successful PNR novels about a post-Apocalyptic world in Dublin. I loved the Fever series, which concluded last year. Dani, supposedly the main character in Iced and a supporting player in the Fever books, wasn't the most interesting person, but I wasn't opposed to her getting her own book.

Guys, I had so many problems with this novel. Whereas the Fever series felt like it knew exactly where it was going, and I could relate to the characters, Iced seemed like Moning was making it up as she went along. And I could not connect to Dani at all. Let's break it down a little, shall we?


Basically I really did not get Iced. At all. It just seems like a really weird, meandery book where the author didn't fully think everything through and then the editor didn't ask the right questions. But obviously that's just my personal opinion. And on the plus side I don't have to buy any more books in this series, yay!