Review: THE IMPORTANCE OF BEING WICKED by Miranda Neville 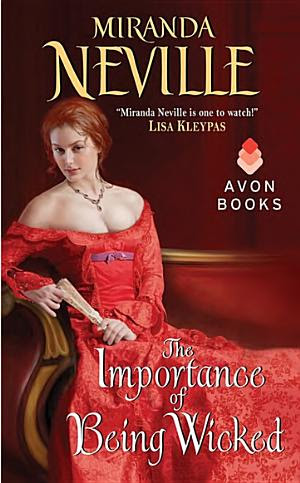 Although the Duke of Castleton and Caroline Townsend are of completely opposite dispositions--he, being proper and conventional; she, determined to live with no regard for society's rules--they both find themselves in similar financial straights due to the irresponsible behavior of other people. When Castleton sets out to court Caro's wealthy cousin, he finds himself attracted to the bohemian widow and is quickly drawn into her misadventures.

The Importance of Being Wicked has a lot of problems, but I ended up enjoying it anyway. Problem the first is some pretty dodgy history. If you're the type of person who's driven crazy by historical inaccuracies, just walk away right now. I already discussed the novel's questionable use of art here, but honestly that's the just the tip of the iceberg. Castleton is alternately addressed as "Your Grace" and "Duke" by the same people, sometimes within the same sentence (only social equals addressed dukes as "Duke," everyone else used "Your Grace;" it wasn't interchangeable); and the characters say things like, "Uhg," and "true blue" (which referred to one's political leanings, not the nature of one's character). Honestly I was a bit taken aback by the careless use of terms and disregard of historical context in this novel, considering that Miranda Neville's last two books were impressively researched--as far as I noticed, anyway--but fortunately I'm not one of those people who demand historical accuracy in order to enjoy a work of fiction. All right, I'll admit the whole Duke/Your Grace thing was a bit crazy-making, but not so much that I couldn't still enjoy the story.

Problem the second was the plot, if one can call it that. It was really thin and not enough to hold the book together. As a result The Importance of Being Wicked felt episodic, especially in the second half. There were a lot of threads going on in this story--the painting by Titian, financial hardship, the whole thing with Castleton's mother, Caro's pregnancy, etc.--that just sort of waved around in the wind and then ended without ever being tied together. The pacing of the story also slows way the heck down in the second half of the book; but then I'm of the once-they-get-married-let's-wrap-the-book-up school of thought.

Those problems aside, however, I really enjoyed The Importance of Being Wicked. I liked it a whole heck of a lot more than Confessions from an Arranged Marriage (post here), and I think the main reason was that I loved the two main characters. Was Caro a bit unbelievable as an eighteenth-century daughter of an earl? Yeah, but I still liked reading about her adventures and sympathized with her actions throughout the book. Castleton was also a fun character because he was so easily shocked by everything and, though he prided himself on being level-headed, spent an awful lot of time threatening to punch people in the face. He had me at the first K-O.

Also, I can forgive a lot in a romance novel as long as the hero and heroine have chemistry, and that was totally the case in The Importance of Being Wicked. I loved Castleton and Caro together and thought the way they fell in love was really delightful (I am, incidentally, a complete sucker for opposites attract romances, so that was basically a sure bet for me from the beginning). I also really appreciated the fact that neither Castleton nor Caro were ridiculously wealthy: usually in romance novels (I'm tempted to say ALL THE TIME WITHOUT ANY EXCEPTION, but I won't) the hero is rich. He can be ugly, he can be socially awkward, he can be a dishonest asshole, he can even smack the heroine around a bit or be not-a-peer, but he's ALWAYS rich. Not in this case! The fact that Castleton, who as a duke had huge financial responsibilities, was willing to marry Caro and take on her additional debt made The Importance of Being Wicked very unusual and added a sweetness and believability to their romance that I fell for completely.

Would I recommend The Importance of Being Wicked? Yes, although I can see where it might disappoint some people or just not be their cuppa. It's not a perfect book by any means, but I think if you're partial to romance there are enough things to like that outweigh the negatives. For the most part I had a great time reading it. Thank you to the publisher for providing me with a copy to review! And in the future please give Miranda Neville better covers.