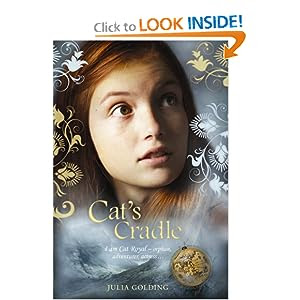 After traveling through the British colonies in America and the Caribbean, orphan Cat Royal has returned to London only to discover that her long-lost family wants to get in touch with her. But are they looking for her, or for money? Cat decides to travel to Scotland to find out.

I'm beginning to think the quality of any Cat Royal book can be immediately ascertained by the cleverness of the "The Critics" section in the front matter of each book. For example, I loved loved LOVED Cat Among the Pigeons and Black Heart of Jamaica, and in both of those novels "The Critics" sections were so cute and hilarious I could barely contain myself. In Cat O' Nine Tails, however, "The Critics" section was really blah and uninteresting, kind of like that book! The same was true for Cat's Cradle, and therefor I had a sneaking suspicion it wouldn't be the best Julia Golding novel I'd ever read when I started it. I was right.

Cat's Cradle was basically really boring and felt episodic. I was glad Cat got to find her family, and I thought some of the locations she went to in this book were interesting (a fabric mill, for example); but it didn't feel like there was a central challenge or antagonist for her to overcome, and as a result the whole things felt really blah. Don't get me wrong, Cat's Cradle was still enjoyable, but as soon as I put it down I had NO desire to pick it back up again. Not even when I was bored out of my mind and actually in the mood to read something.

Another thing that was kind of disappointing about Cat's Cradle was the lack of Billy Boil. Billy, if you haven't read the series, is Cat's archnemesis who insists that they belong together. He's my FAVORITE character, and he's not involved in the story of Cat's Cradle at all. Frank (son of a duke who's super-fun and nice) and Syd (leader of the Covent Garden gang and Cat's bestie) are in the novel quite a bit, and they're great; but Cat just isn't Cat withouy Billy pushing her buttons. He's like the Fred to her Ginger! Now that I think of it, all of the books I've really liked in this series have featured Billy prominently.

I'm not ready to give up on the Cat Royal books, but Cat's Cradle was REALLY disappointing. About halfway through I realized I'd either have to DNF it or skim through it. Since I didn't want to DNF it, I skimmed, and it was still really hard to finish. I DO want the series to keep going, just because I love the characters so much--but I hope the next book is better, especially since I have to special order them from the UK.