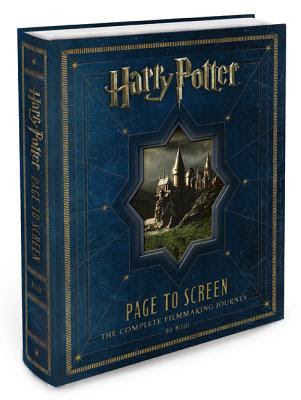 Once upon a time there were people who loved books, and made movies from them. One day they received a magical manuscript and read it, not expecting very much. But soon they realized they were reading the greatest book of all time! Thus the people who loved books made a movie from the book, and also seven more movies, all of which brought the world of the magical manuscript "to life." And everyone lived happily ever after.

Harry Potter Page to Screen is basically the story of how the Harry Potter movies were made. Surprisingly, I loved the hell out of it. I say surprisingly because usually these types of books are either complete fluff or eye-searingly boring, with a lot of mutual reach-around commentary from the people involved. I'm not saying there's not some self-congratulation going on in Harry Potter Page to Screen, but what's there is palatable because the text is really well-written and informative. Bob McCabe did an amazing job of condensing tons of interviews and material into something that was honestly entertaining and interesting to read.

Any movie being made is a small miracle--there are so many things that can go wrong to stop production, and often do. Creating a film is a HUGE undertaking; now imagine creating eight of them with the majority of the cast and crew remaining consistent over the course of a decade! I agree that the Harry Potter films are incredible just for that, and that the set design is top-notch. I'm also interested in how involved JK Rowling was in the films (the answer is very: she had final veto on ANY aspect of the movies, and David Hayman, the producer, said Rowling was the only person in the audience he cared about pleasing) and how they inform the world of the books, and Harry Potter Page to Screen is definitely illuminating when it comes to that.

For some reason I found the story of the creation of the Potter films really moving. Like I started crying on page one of the introduction (note that I am a sap; your mileage may vary). Maybe it was just remembering the books first coming out and reading about the enthusiasm the filmmakers felt for them. There's no doubt that nearly everyone on the project, from the producer to the crew, was dedicated to bringing the novels to life, not just wanting to make a movie. Apparently I get all sentimental when people love books! There's also that the majority of the cast DID basically spend their school years at "Hogwarts" and that the last film was a graduation from their childhood life and into their adult careers. Life did weirdly imitate art in a lot ways.

Finally, the visuals in Harry Potter Page to Screen are amazing. I loved the photographs of the kids when they were auditioning for their roles (so cute!), and the concept sketches by Stuart Craig were fantastic. A good portion of the book is dedicated to art direction; and although the text for this section isn't as interesting to read, the pictures of details from the costumes and set design are really great. Tea pot earrings for Mrs. Weasley! How perfect is that idea? I want a pair. And the Death Eater masks were incredible and scary.

Harry Potter Page to Screen is a huge, gorgeous, really expensive book (thank god for libraries, huh?) that's totally worth checking out if you're a fan. I liked it.