From Booking Through Thursday:

Last Saturday (May 2nd) was Free Comic Book Day! In celebration of comics and graphic novels, some suggestions:

Part of the reason I'm actually posting this is because I want to know if anyone who reads graphic novels on a regular basis has some recommendations.  As some of you might know, I only just started reading manga (vampire manga, to be specific), and I heart it.  So far I've only read Midnight Secretary (goody-two shoes secretary finds out her boss is a wampire, then they start sleeping together; now they're getting married and she still calls him "Mr. President."  Ugh!  How can he stand her?) and Vampire Knight (high school + a bunch of vampires + love triangle = fun).  They were both huge time sucker-uppers.  I think I might have actually found something more trashy than romance novels.

Next I planned on reading Vampire Hunter D.  This one is harder to find online, though, and it's not at the library.  Which means I'd probably have to buy it--that's not going to happen. 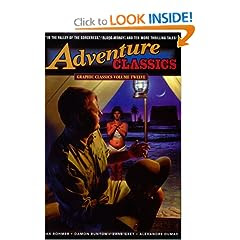 So I decided to try a regular comic book, instead.  Mainly I chose this one because it has a story based on a Sax Rohmer tale (this is an author I'm starting to become obsessed with).  It also has adapted stories from Alexandre Dumas, Arthur Conan Doyle, and Damon Runyon (he grew up in my hometown, so I have to read stuff by him).  So far the art isn't that great, which is a major let-down; but I do like the story, which is about a mysterious Ancient Egyptian Queen named "Hatasu" and her architect/advisor... wait for it... Sen-Mut.  Hmmmmm.