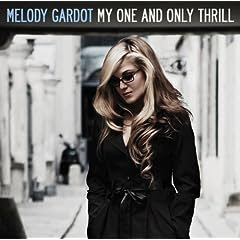 As some of you might know, I've been slightly obsessed with jazz music since I was eight.  If you also happen to like jazz, I can't recommend Melody Gardot's new album, My One and Only Thrill, enough.

One of my mom's friends, who was a professional jazz singer in a former life, described Gardot as a chanteuse, and that is extremely apt.  Her voice is absolutely great--able to stand up to the greatest jazz singers like Sarah Vaughn, Helen Merrill (one of my favorite singers of all time), or Etta James.

Meanwhile, the songs on the album are perfectly written and beautifully produced by Larry Klein (the same guy who produced Joni Mitchell's jazz album, Herbie Hancock, and Madeline Peyroux, among others).  The songs have the timeless quality of Gershwin standards, while the production is very early-sixties in feel.  I could see this as a soundtrack to a film noir or a stylish romantic comedy set in Paris á la Funny Face or Charade.

Although Gardot's last album, Worrisome Heart, was good(ish), it didn't have the focus and sound of My One and Only Thrill, which is like a perfect slice of time captured into memory and put to music.  It's lovely, haunting, and completely sucks you in.

For a sample, there's a video of Baby I'm a Fool on YouTube.  The video itself is awful--it looks like a Calvin Klein fragrance or diamonds are forever commercial.  But you can get an idea of how the rest of the album sounds, at least.