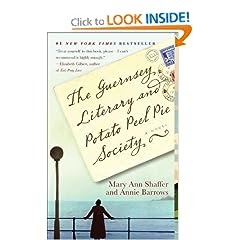 When I first opened this book, I didn't know what to expect.  I'm not a real fan of epistolary texts (Dracula and Dangerous Liasons didn't do it for me) because I find it difficult to get into a narrative with them.  But I decided to try Guernsey since it was part of A Buckeye Girl Reads' book club, and she had given it a very positive review.

For the book club post this month, Buckeyegirl31 and I decided to take on the spirit of the novel and discuss Guernsey via letter.  The second half of our conversation can be read on A Buckeye Girl Reads' site.  Enjoy!

Letter from Tasha (heidenkind) to Colette (A Buckeye Girl Reads)

The Guernsey Literary and Potato Peel Pie Society is the longest title ever.  Fortunately, I enjoy long, weird titles, and also have faith in your excellent taste in books.  Guernsey is an island in the English Channel that was occupied during WWII.  The book itself tells the story, via a series of letters, of a London writer named Juliet who discovers Guernsey and its eccentric-yet-lovable inhabitants.  It all starts when Dawsey Adams writes to her about a book she used to own (her name and address were on the cover of the book--totally doing that with all my books from now on, btw!).  She soon discovers he's a member of the weirdly named literary society, which was started in order to avoid German imprisonment during the occupation (should that be capitalized?).

I can't help but feel like some of this book was taken from Pride & Prejudice.  And not just because I see P&P practically everywhere.  Our noble-yet-spunky heroine, Juliet, at first seems to be falling for the dashing Markham Reynolds, whom I keep picturing as Capt. Jack from Torchwood.  But then we realize someone else is secretly in love with her, and then she realizes she's in love with him.  See?  Just like P&P.  And he loves her because she reads.

Which brings me to the subject of Dawsey Adams.  I didn't see the appeal; I guess I don't go for the yeoman type.  What makes Dawsey so attractive?  Seriously, I want to know.

I loved a lot of the characters in the book, especially Juliet.  I loved that she broke off her engagement because her fiance started packing away her books.  Good call!  I also loved Eben because he reminded me of someone I work with--I could totally hear his voice channeled through the pages of the book while I was reading Eben's letters.

One character I absolutely hated was Elizabeth.  UHG.  Could miss perfect and her halo be more annoying?  By the time I got to the part where she was in the concentration camp or prison camp or wherever she was, I was thinking it was a good a thing she was dead or she'd be insufferable.  I'd almost rather put up with someone like Adelaide Addison, because at least you'd get some entertainment value out of her.

Now that you probably think I'm a terrible person... uh, yeah.  I'm just a bitch when it comes to books I guess.

One of the things that I loved about this book, and which I think makes it attractive to any book lover, is that it's all about bibliophiles and seems really relevant to book blogging.  When the GL&PPP Soc. first starte, they just read books and review them.  But then they start trying to get other people in the book to read the books they like, too; and then they start having conversations about it.  Practically everyone in the book is bound by their love of books and stories, and those that aren't soon want to forge that connection, too.  For example, the scene where Jonas Skeeter tells Woodrow Cutter what he thinks about The Meditations of Marcus Aurelius is one of the most memorable in the book.  Woodrow and Jonas are friends, and Woodrow (who is already a member of the Society) convinces Jonas to read his favorite book by shaming him into thinking he should do something profound.  Jonas' response:  "...I did read it and here is what I think.  Marcus Aurelius was an old woman--forever taking his mind's temperature--forever wondering about what he had done, or what he had not done.  Was he right--or was he wrong?  Was the rest of the world in error?  Could it be him instead?  No, it was everybody else who was wrong, and he set matters straight for them.  Broody-hen that he was, he never had tiny thought the couldn't turn into a sermon.  Why, I bet the man couldn't even take a piss--"

One might think that this insulted Woodrow, but instead the two shook hands and headed off to Crazy Ida's, which I'm assuming is a bar.  I think this is a great illustration of what we do as book bloggers:  tell people about the books we read, try to get people to read the books we love, and then talk about them!  Even if someone doesn't enjoy the same books you do, you still have something in common.  It's like old skool book blogging.

Anyway, overall I loved the book.  What did you think?

Letter from Colette to Tasha

When I saw the name of this book for the first time, I thought why in the world would you name your first book The Guernsey Literary and Potato Peel Pie Society?  It wasn't until they explained how they got the name of the society that I went: "oh..it makes sense now."

I loved the fact that the whole story started because Dawsey Adams was hunting down more books by an author from a book that Juliet used own.  I thought that was the coolest thing ever, and like you am totally writing my name in every book I own...well except for the smut ones, because I'd be afraid of what kind of guy I'd attract to me then!

When the book starts out the heroine, Juliet, is on a book tour promoting her book that was taken from humorous articles she had written in a London paper. She keeps getting flowers from the mysterious American, Markham Reynolds, and finally meets him and starts dating him. The whole time Markham is courting her, she's writing letters to Dawsey Adams. Dawsey shows her letters to the Guernsey Literary and Potato Peel Pie Society and she starts writing to different members. She starts to fall in love with the island and its people from the letters, and the jerk Markham doesn't understand the whole letter writing thing. The whole time they date I wanted to shout to Juliet: "no, you have to go and meet Dawsey!! You don't need this guy."  Which brings me to your point about the Pride and Prejudice connection. I can't believe with all the Jane Austen type books I've been reading that I didn't see the Pride and Prejudice connection. My only excuse is that I read it before all of my JA themed books.  (It's still not a very good excuse, but I'm sticking to it.)

Now that you've gotten that idea stuck in my head, Markham does act an awful like Wickham.  Cute & handsome at first then you find out he has a secret he's hiding from everyone. It's funny that you say that Markham reminded of Captain Jack Harkness in Torchwood because I kept picturing him as George Clooney. Dawsey is totally Mr. Darcy-quiet, & aloof until he is among friends. Which brings me to this point: How could you not love Dawsey? I admit I fell a bit in love with him by the end of the book.

I don't think you are horrible for not liking Elizabeth. She was just too perfect. Falling in love with the one good German on the island-which reminds me, have you heard of Toldt slaves before this book? I hadn't-I love it when I learn something about history in unexpected places. I have to admit she was really annoying me by the end of the book as well, but I still thought it was horrible when she got turned into the Germans for some little infraction. I liked the character of Adelaide Addison because it let us see another side of Juliet, and every story needs a villian or villianess. Didn't you love the story of Juliet trying to rescue her books from her apartment that had burned down rather then other possessions?

I think the best part of the book for me was that total strangers on the island became friends over books, and each one was passionate about the book they choose to share. I also liked how some stuck to the same book and didn't fall to peer pressure to choose another book. After reading this book, I totally want to go to the British Channel Islands. I loved the book, and am glad that you liked it. I got this book from the library, but now want a copy of my own because it's one of new favorites.

To read the rest of the conversation, go to A Buckeye Girl Reads!