Written on Your Skin 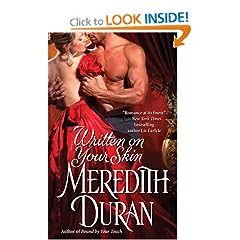 Written on Your Skin by Meredith Duran

The follow-up to Bound By Your Touch, this book is about the romance between the broody Phin and the so-Blonde-she's-smart Mina Masters.  It's not as good as BBYT, but it is a good romance novel that I would recommend.

Phin was a super-spy, but now that he's become the Earl of Ashmore, he can't be ordered around by his arch-nemesis, Ridland.  Then Ridland captures Mina, who saved Phin's life four years ago in Hong Kong.  Phin decides to keep her in his house, even though he doesn't trust her (or himself), and one thing leads to another.  Meanwhile, Mina is trying to find her mom, who was kidnapped by her evil ex.

I loved BBYT, so perhaps my opinion of WOYS was scewed by unfair expectations, but there were several things that annoyed me in the beginning of this book.  First of all, the first three chapters are actually a prologue.  As I mentioned in this week's Sunday Salon, I hate prologues.  Furthermore, I was really psyched about the Hong Kong setting because I love books set in historical China (even though technically Hong Kong was part of Britain at this point...),  but Hong Kong could have just as easily been Delhi or even London--there were no details as to the setting at all; it was purely incidental.  Finally, once the story starts, the conflict between Phin and Mina is one of those that feels like it could be easily resolved if they just sat down and hashed it out; but instead, they either ignore one another; or when they talk they do so in circles, which drove me crazy.

So because of those two things, I was a little underwhelmed by the romance once it started to get going.  But the book isn't terrible by any means, and if you don't have a problem with prologues or misunderstanding plots, you likely won't be bothered by it at all.

By far the best part of the book was Phin's character.  In my review of BBYT, I said Sanburne was like an animé character (still love Sanburne better, btw).  Well, Phin is like Batman:  he operates under this façade of a wealthy socialite, but there's another side to him that's dark--very, very dark, and powerful and controlled to within a millimeter.  Even though that side of Phin is essentially good, it has tortured and murdered people, and done terrible things.  Mina says Phin's problem is that he doesn't trust himself, but I don't think that's his issue at all; I think his real problem is that he's suffering from an identity crisis.  He doesn't know who the "real" Phin is--the man who can kill with nary a thought, or the useless (and harmless) artistocrat living in civilized luxury.  He's terrified it's the former; and is haunted by the possibility that if he is his darker identity, when will it come out and take over?  Duran captures the loss of control Phin feels when he's in the grip of his dark self beautifully with a rush of words that makes you feel like you've stuck your head out of the window of a train and they're whipping past you.  There were times when reading this book where I felt truly breathless and dizzy with the unstoppable speed of Phin's thoughts.

Mina is harder to like--actually, I never warmed up to her.  She's the polar opposite of Lydia from BBYT:  Lydia is in-your-face intelligent and bookish, and almost incapable of pretending otherwise; Mina is like a 19th Century version of Marilyn Monroe, always playing up her role as the "dumb blonde" even though she's very sharp.  What bothered me about this is that she never really seemed that dumb to me, and the fact that she was able to fool so many people for so extended a period (like her stepfather who lives in the same house) is a bit difficult to believe.  Also, I never forgave her for letting Phin fall literally on his face after he'd been poisoned.

This is another beautifully written romance from Duran, and she's still my favorite new writer.  I personally didn't like Written On Your Skin as much as Bound By Your Touch--I would have prefered it if the book started in 1884 London, and if Phin and Mina got the I-don't-trust-you-because-you-might-have-alternative-motives part of their relationship out of the way much quicker--but someone who preferred darker romances could certainly have an opposite preference.  I'm definitely looking forward to Duran's next book!