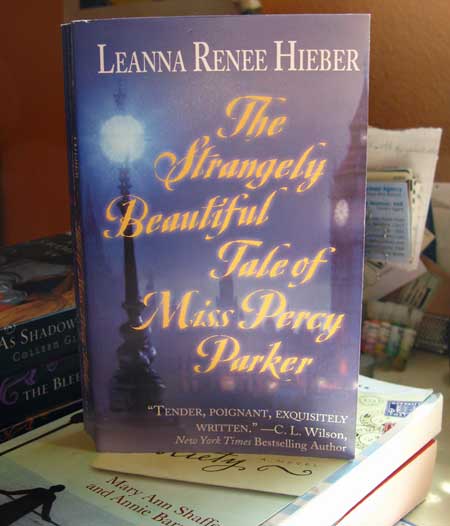 This unusual and unique historical romance combines the paranormal, Greek mythology, and adventure into a very engrossing read.

It's 1888 London, and there is a group of six people possessed with the powers to banish spirits--Alexi, the leader of the group and a professor; Rebecca, the headmistress of Athens Academy; Michael, a vicar; Josephine, an artist; Elijah, a ne'er-do-well; and Jane, a healer.  These six people are awaiting the arrival of a seventh, prophecied from when they were first possessed, to help them fight... whatever it is they're fighting (they don't specifically know).  Unbeknownst to most of the rest of the group, Alexi is convinced that the seventh will be the reincarnation of his goddess and his true love.

So it's safe to say they're all a bit impatient for the seventh's arrival, especially Alexi.

Into all of this wanders Miss Percy Parker, an albino orphan raised in a convent who is very innocent, not very confident, and has a gift for languages.  Oh, and she sees and talks to dead people and has visions.  Could Percy be the seventh?  Gosh, I just don't know!  The other six dinglebats in this group certainly have a hard enough time figuring it out.

Anyway, Percy (who I imagine looking like Princess Nuala from Hellboy II:  The Golden Army) is thrilled to be attending Athens Academy, a progressive co-ed institution; and she's even more thrilled with her yummy math professor.  Rawrrr.  Too bad she sucks at the maths.  Aha, BUT, since she's so bad at it, she needs some private after-hours tutoring from the teacher.  Ohhh yeahhhhh.  If the office is a-rockin', don't come a-knockin'.

I became really, insanely involved in this book.  I loved the set-up with Percy entering the Academy and being a total romantic, and then being told she'll be expelled if she so much as touches a male.  You can't help but look forward to how things are going to shake out after that.  Athens Academy has an almost Harry Potter-like feel to it, especially with ghosts floating around everywhere and Alexi stomping about and swirling black professorial robes like Snape on a bender.  The relationship between the six Guardians, although only hinted at in the book, is also very complex and practically crying out for a sequel (or several).

The only part of the book that kind of freaked me out and that I would bother to take issue with was Percy and Alexi's relationship.  As Stacy pointed out in her review, Percy seems very meek.  I could see why that bothered Stacy, although I accepted it as part of the Gothic genre and expected Percy to grow more confident during the course of the story.  But it did bother me insofar as the balance of power between her and Alexi is so obviously in Alexi's favor.  Percy has nothing--no friends, no family, and no hope of every marrying because she believes she's horrific.  Alexi, meanwhile, has money, friends, family, a job in which he is her teacher... so of course she's going to be attracted to him.  And when it's a question of whether Percy is risking anything by being in a relationship with him, personally I don't think it's that much.  For most of the book, Percy's attraction to Alexi felt more like a silly crush to me than true love, although their relationship does eventually become deeper and seems more equal.  But the real question is, is there ever any danger that Percy is going to break off this relationship?  Hell to the no--she has too much to lose.

I'm sure there other various things in this novel that might bother people, but trust me when I say it doesn't matter.  This is the type of book that needs to be read in one sitting.  First of all, if you try to do anything (like drive) while you're reading this book, you're not going to be able to keep your mind on the activity in question, which could be dangerous (not that I'm speaking from personal experience or anything *cough*).  And second of all, the story in the book is very much like a suspended dream.  You don't want to stop reading and break the spell.  Sure, I could probably pick elements of the plot apart three ways to Sunday, but I won't because I bought into it completely while it was happening.  There were times when I was seriously bothered by the actions of the characters in this novel, but that was because I so deep into it; and I haven't been that involved in a book in a long time.  I have to say, it's a wonderful feeling.

Much love to Katiebabs for introducing me to this novel and convincing me to read it with her review.  I would love to return to the strangely beautiful world of Percy Parker and learn more about it whenever I get the chance.