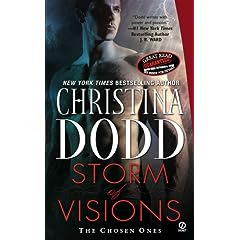 Storm of Visions by Christina Dodd

This book is basically a mess.

When I first started it, I thought it looked promising.  No prologue (always a good thing), no annoying miles of backstory; we're just dropped straight into Jacqueline Vargha and Caleb d'Angelo (or is it D'Angelo?) meeting in California.  They obviously know each other.  But then the book feels like it starts again a little while later in New York City, and again when we get into the whole unnecessary backstory (flashback alert! doodly-do, doodly-do, doodly-do) o' Caleb and Jacqueline.  In fact, I could tell that part was the beginning of the book at some point, because all the introductory information about Jacqueline and Caleb that we'd already received was repeated!  Great editing, btw.

So, what is this book about?  Well, when kids are abandoned by their parents, they receive special powers, and they either work for the Devil or The Good Side [insert favorite deity here].  The good guys are called The Chosen Ones and the baddies are called The Others.  What separates the good from the ugly bad?  Well, I'm not entirely clear on that--I think it's the people who find them and raise them.  But basically, there is ABSOLUTELY NO DIFFERENCE between The Chosen Ones and The Others, other than the fact that one is good and ruled by... (? I'm guessing capitalism), and the other is evol and is ruled by the Devil.  And they hate each other.

Pop quiz time!  Given the above set-up, what romantic relationship do you think is rife with the most potential drama and angst?
If you answered 1, then you're in for disappointment, because that is the only thing not going on in this book.  The main romance--if one could call it that--is totally lame and not really the focus of the book, anyway.  Which is kinda-really annoying, since I'm 98% sure it says romance on the spine of the book.

Aside from the dead-in-the-water romance, the rest of the plot does not make much sense.  There are characters in the book that have zero purpose, I have no idea what half of The Chosen Ones' powers are, I'm utterly confused about how the organization of The Chosen Ones works (is Irving a Chosen One?  Do only the 7 leaders have powers?  Why do they operate out of a travel agency, of all things?), and all the characters spend 3/4ths of the book literally doing nothing.  NOTHING.  So that's pretty damn exciting.

Wait a sec, this is starting to sound familiar--a plot that's a complete mess and an unromantic romance.  Weren't those the same issues I had with Dodd's last book?  (Aha!  They were--thank you, book blog.)  Wow, two really bad books in a row.  It looks like I might have to find a new favorite author.

Other reviews I found, in case you're curious:
Darque Reviews