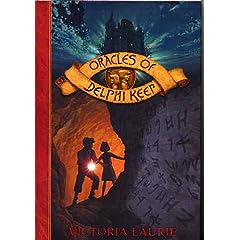 This is a well-written YA adventure novel filled with magic, mystery, and scary beasties.

In pre-WWII England, the young orphans Ian and Theo (short of Theodosia) are exploring the caves that crisscross the cliffs of Dover like Swiss cheese.  Ian wants to be an adventurer when he grows up and find loads of treasure to support himself and Theo, so he explores the cliffs for practice.  Theo is kind of like his adopted sister and is set against him looking through the caves because the headmistress of the orphanage they live in, Delphi Keep, has forbidden it; but she tags along anyway because someone has to keep an eye on him, and she has a terrible feeling (Theo has a lot of portentious feelings because she's psychic).  On this particular trip, they discover a new cave filled with strange writing.  They follow the writing into a cavern where Ian discovers a silver box--his first treasure!  As he's prying the box loose, they two children hear a terrible howl.  Coming after them from the other end of the cavern is a giantic wolf!  Ian and Theo manage to save themselves; but unknowingly they've unleased a terrible evil and put themselves in mortal danger.

I can't really talk about the story any more without giving away spoilers, but this is the type of book that is full of twists and exciting things happening every few pages.  It really reminded me of an Indiana Jones movie in that way.  And also like Indiana Jones, the plot twists together archaeology, ancient mysteries, and the paranormal (although there's a lot more paranormal elements in this book than you'll find in an Indy movie).  When I first started the novel, I expected it to take place in Greece--well, it doesn't, but Ancient Greece does have a role in the story.

The author, Victoria Laurie, does an absolutely excellent job of capturing the time and place of the novel, along with the English mannerisms of the characters.  The kids even get yelled at for using the word bloody!  She also tells a wonderful story--I was really impressed with the way she weaved all the disparate elements and characters of the narrative together and drew me into the world of Ian and Theo.

I did get frustrated with the book, however.  Part of this is my fault because I was so busy I couldn't devote large chunks of time to reading it; but in the last quater of the book, it started losing me.  One of the interesting things in the novel is the prominent presence of adults.  Usually in YA and Middle-Grade books, the adults are mysteriously absent or just plain oblivious to what's going on; here they take a major interest in the kids' lives and have very active roles in the plot.  For the most part, I actually liked this.  Near the end of the book, however, I began wishing the kids and adults would be separated so that the focus of the story would return to Ian and Theo.

My other major problem near the end of the book was Theo.  Let me be clear:  this book is Ian's story.  Theo starts out as his sidekick, but as the book goes on, for various reasons she becomes more and more the object of Ian's protection.  Correspondingly, she starts off as a strong character but by the end of the book she seems to spend all her time either crying or huddling near one of the boys for protection.  Furthermore, Theo's psychic abilities are not consistent.  She can see WWII very clearly, not to mention other events, but she doesn't see Ian getting attacked by the giant wolf?  Or their party being attacked in the desert?  There was no explanation given for why she sometimes has visions and sometimes doesn't, and no one calls her on it (which I certainly would if I were in that position), so it starts to feel like her visions are just a convenient plot device.

Although I did feel like the story lost focus at the end, for the most part this was a very fun and entertaining novel that I'd definitely recommend.  I know there have been issues with Victoria Laurie in the past (as detailed at Dear Author), and that some bloggers are boycotting her books as a result.  That's understandable, but personally I think it's a shame to let it keep you from reading a truly excellent book like this one.  Laurie has penned a rare wonderful adventure tale that deserves huge props.