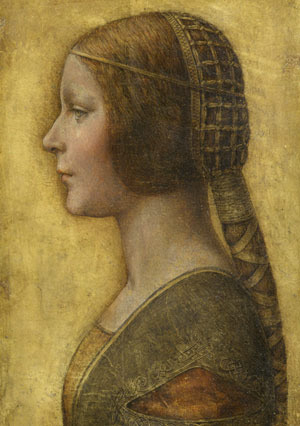 According to recent news reports, the above painting has Leonardo da Vinci's fingerprints all over it--literally. Well, one fingerprint.

The painting was bought from Christie's by Canadian Peter Silverman for about $20,000 (whether that's in Canadian or American dollars, I don't know). It was listed in Christie's catalog as a portrait by an unknown German artist, circa the 19th century; but Silverman thought it might date back to the Italian Renaissance based on the clothing. Enter a bunch of experts like Peter Paul Biro, a forensic art expert, and Martin Kemp, professor emeritus at Oxford University (who is currently writing a book about the subject), and come to find out the painting is the work of one Leonardo da Vinci.

Though multispectral analysis, Biro found a print that matches one found on Saint Jerome in the Vatican. That Leonardo, putting his grubby little hands all over everything.

A study of a young girl by Leonardo da Vinci

Okay, so I'm not an expert on Leonardo da Vinci or anything, but I have to say... really? Because this doesn't look like any portrait by Leonardo that I've ever seen. I can definitely see where it's in the style of the Italian Renaissance, but how many paintings by Leonardo can you think of where he has the sitter completely in profile? Drawing a person's face in profile is much easier than drawing it in three-quater view or facing toward the viewer, which is exactly why Leonardo--who wanted everyone to know exactly how good a draftsman he was--tended not to do it. And even when he did paint or draw someone in profile (the portrait of Isabella d'Este, for example), he has some sort of twisting going on between the neck and shoulders, probably to give the portrait a greater sense of visual movement.

Beyond that, I think a portrait by Leonardo would have more elegance and personality than this piece does. Leonardo wasn't just interested in capturing how a person looked, but their personality and essence, as well. He was once quoted as saying that the greatest measure of an artist's skill was whether or not he (of course in Leonardo's world, all artists were "he") could illicit desire through the mere portrait of a woman--trick the viewer into thinking they were looking at a real woman, in other words. This involved not just making the portrait subjects desirable, but believable as real individuals with personalities. When I look at the Silverman painting, I don't see any attempt at capturing her personality or making her a "real" character.

I'm not saying I doubt the vaunted art historians' findings, just that I find it... odd. If I was presented with this work by someone who told me, "Hey, I bought this at an auction and it's supposed to be from 19th-century Germany, but I think it might be from the Italian Renaissance," I would be like, "Okay, that's plausible." And then I would try to research it with documentation and stylistic analysis. I would not immediately think of Leonardo da Vinci and then send the work out for multispectral analysis and carbon dating--like wtf? That's the sort of thing museums pay for after tons of research and applying for a billion grants. And then it just happens to have a fingerprint on it that just happens to match up to the single fingerprint of Leonardo's that we know of. That's a rather happy coincidence, no?

Perhaps all will be explained with the publication of Kemp's book about the piece, and I will be revealed as a cynical bitch. And hey, amazing discoveries happen. If so, this would be pretty awesome. For the moment, however, I find it all a wee bit too convenient.