With Seduction In Mind 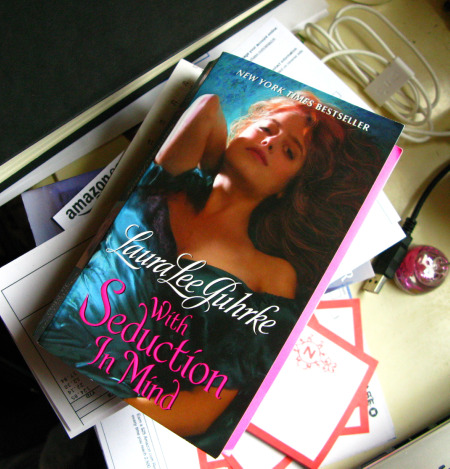 With Seduction in Mind By Laura Lee Guhrke

I have never met a Laura Lee Guhrke book I didn't like, and With Seduction In Mind was no exception.  Although it's not my favorite book by her, it still delivers a satisfying historical romance.

Daisy is a total screw-up--she can't hold a job to save her life, and she's afflicted with a horrible case of verbal diarrhea.  She also wants to be novelist!  Then one day the lightbulb goes off and she remembers that one of her best friends is actually married to a publisher.  Ding ding ding!  Does she try to use this relationship to her advantage in order to get a manuscript published?  Oh, I think she does.  Meanwhile, said publisher asks her to write a review for the new Sebastian Grant play that has just opened.  Daisy is a fangirl, so she readily agrees.  Unfortunately, she hates the play, and her review reflects exactly how much.  I believe the phrase, "As amusing as a trip to the dentist," is thrown around.

Sebastian has just returned from Europe after weening himself off a cocaine addiction.  The good news is, he's now drug free; bad news: he can't write without the blow.  OR SO HE THINKS.  He reads Daisy's review, is incensed by it because he knows she's right, they meet at the publisher's office and Marlowe senses that the two have chemistry.  So he does what any romance novel character would do and hires Daisy to be Sebastian's editor.  She tells Sebastian that she'll kiss him for every one hundred pages he writes, and you can probably guess how it goes from there.

Guhrke has written about artists who are unable to create before--His Every Kiss' hero was a composer who had tinnitus.  Here we have a writer who's unable to write and doesn't even enjoy writing when he can.  But then he finds a new drug to inspire him:  Daisy.  Daisy makes writing fun because she gives him the smooches.  Pretty soon, he starts thinking he needs Daisy to write.  Eventually this is translated into, "Oh, I like having you around because I love you, duh!" but to me that transition felt rather abrupt and unbelievable.  I think Sebastian does need her to write, and that's why he wants her around.

It's difficult to sympathize with Sebatian's character because he seems to have everything, and everything he's afflicted with is something he did to himself.  Unlike Dylan from His Every Kiss, who was truly tortured through no fault of his own (and not titled, with his own estates and houses), Sebastian took drugs because he was bored, not even caring if what he produced was crap.  I know the arc of a happy ending should eventually lead to Sebastian writing again, but personally I would have been okay with it if he'd come to a personal realization that he couldn't write any more.  Sorry, but he made his choices.

Which leads me to Daisy and her writing.  That's right, Daisy is a writer, too, remember?  She starts the book wanting to create her own work, but ends up being a muse for a man who calls her "Petal."  As soon as she starts having a relationship with Sebastian, she can't write--I kind of wanted her to end things right there.  But no, she sticks around.  Don't get the wrong idea:  her and Sebastian's working relationship isn't completely one-way.  They do help one another and give each other constructive criticism.  But let's be honest, Sebastian is "one of the greatest writers of this generation," and she's just a novice.  Her main role here to get him to start writing again.  Shades of objectification that squick me out!  And, since the entire plot seems to center on Sebastian finishing another novel and realizing he's not a dried up shell of an artist, once he does finish writing the book, it feels as if Daisy and Seb can go their separate ways.  I would have been much happier with the story if it had focused on Daisy discovering she's a good writer, and finishing and publishing a novel.  Sebastian can remain an empty vessel as far as I'm concerned.

I did like this book.  I stayed up until four in the morning reading it, and I enjoyed it.  I just think the potential for something much more was there, if Guhrke had taken her own character's advice and put the story first.

How I obtained this book:  I ordered it with my own sanity blood hard-earned money from an online retailer whose name may or may not start with an A and end with an N.  Then you do the hokey pokey and turn yourself around, and that's what it's all about. *clap clap*


Other reviews:
AnimeGirl's Bookshelf
Babbling About Books, and More!
Did I miss yours?  Please let me know in the comments!