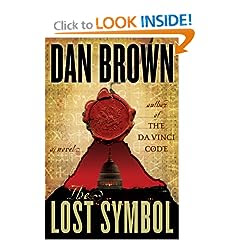 The Lost Symbol by Dan Brown

In what I'm assuming is the last book in the Robert Langdon: Symbologist! series, Brown moves the reader from Europe to the US and takes us on a tour of the hidden world of Washington, DC.  Except the hidden world doesn't seem so hidden, and the secrets aren't very difficult to unravel.  Overall, the novel is just okay, and a far cry from The Da Vinci Code or Angels & Demons as far as story-telling is concerned.

I should probably preface this review by saying that I actually do think Dan Brown is a good writer (but then I read romance novels, so I'm sure the people who would say he's not a good writer would question my literary judgement anyway).  He tells a good story and he researches the hell out of his books, which is something I always appreciate.  I don't normally go for books like The Da Vinci Code or Angels & Demons, but I enjoyed them anyway for those two reasons.  And also cuz of the art history shout-outs.

In The Lost Symbol, Robert Langdon, professor of a fictional discipline at Harvard, receives a phone call early one morning from his insanely wealthy, smart, and influential friend--the best kind of friend to have!--Peter Solomon.  Pete wants Rob to hop on down to DC to give a lecture on symbols.  Well, of course Langdon agrees, except he never speaks to Peter himself, and the next thing he knows, he's staring at Peter's severed hand in the capitol building.

You see, a man with many tattoos has decided he wants Langdon to uncover the Masonic pyramid that, legend has it, is hidden below DC and has bunches of secret knowledgy stuff.  If Langdon refuses to help, the bad guy will kill Peter.  Oh noes!  Langdon keeps insisting the pyramid is just a metaphor (rather comical coming from him, considering the last two books), but this isn't very helpful.  Meeeeeanwhile, people can affect the world around them with their thoughts.  So, all that negative stuff you keep thinking about?  STOP IT!!

Much of this book feels like a retread.  Newton plays a big role, again, and Langdon solves puzzles in much the same ways he did before, becoming embroiled in a "secret" organization and alternately chased/helped by law enforcement.  This wouldn't have bothered me too much--I'm not philosophically opposed to formulas--but the puzzles aren't puzzling, the hidden places are boring, and the twist was so obvious, when I got to that part I was like, "Oh, was that supposed to be the surprise twist?"

For example, one of my favorite parts of Angels & Demons is where Langdon goes into the secret Vatican archives.  How awesome is that! *geeking out*  In The Lost Symbol, Langdon goes into the Library of Congress... when it's closed... and rides the conveyor belt across the street.  With his eyes closed.  Woo freaking doo!  I did like some of the locations--the National Cathedral and the storage building for the Smithsonian, for instance--but it didn't feel like the locations were utilized to the best of their ability.  Same thing with the science of Noetics, which is where people can affect the physical world with their thoughts--that's kind of cool (and freaky), but at no point in the book did anyone try to utilize this science.  And I certainly didn't feel as if I was being shown a "hidden" Washington, DC.  Anthony Bourdain had a DC episode that was more illuminating than this book.

Another thing that was really lame in The Lost Symbol was the villain.  I apparently have a thing for Dan Brown villains--I wanted to cuddle Silas (and Paul Bettany was kick-ass when he played him in the movie), and I loved the yummy Camerlengo. *lick*  But the baddy in this book was just pathetic, from his motivation to his final goal.  Plus, the names he chose were insanely obvious--Dr. Abaddon, really?  If I know that's the name of a demon, it's got to be general knowledge.

By the time the conclusion of the book came around, I couldn't care less about whatever secret there was and blah blah blah.  I honestly wouldn't be able to tell you what the "lost symbol" is--it was probably revealed during the part I skimmed.  But I don't think it even matters anyway, so it's a moot point.

The reason why The Da Vinci Code was such a success was that it took real-life facts, places, people, and events, and fused them together in a very creative, imaginative way.  Even if I thought it was ridiculous, I was completely willing to let Dan Brown take me through the journey of the story.  But with The Lost Symbol, I don't feel like Brown took me anywhere.  It's like Dan Brown lite--lite on the research, plotting, creativity, and surprises.  And I can't help thinking it's because Brown really pulled his punches in this one.  The Masons are depicted as all-around good guys; Noetic science (am I the only one who thinks that's kind of creepy?) is given a thumbs-up; and even the CIA, which spends the majority of the novel completely trampling on the Bill of Rights, is shown to be justified in the end.  Personally, I was like, WTF?  None of this is good.  At the very least it's sketchy.  The Solomons use the quote by Newton--"If I have seen further it is only by standing on the shoulders of giants"--as a positive to show that humankind is evolving and becoming better in that evolution, because we can learn from those who have come before us.  But all I could think of when I read that was Malcolm from Jurassic Park berating the scientists by paraphrasing the same quote,

But scientific power is like inherited wealth: attained without discipline....  And because you can stand on the shoulders of giants, you can accomplish something quickly. You don’t even know exactly what you have done, but already you have reported it, patented it, and sold it.  And the buyer will have even less discipline than you. The buyer simply purchases the power, like any commodity. The buyer doesn’t even conceive that any discipline might be necessary.

Through the course of The Lost Symbol, Langdon does exactly this: attains the super-secretest Masonic knowledge without the discipline and training of a Mason, and he unleashes both that and dangerous Noetic science onto the world.  And the last word in the book is hope? It should be, Save yourselves while you still can!

Anywho... although the beginning was promising, by the end the novel felt mediocre and difficult to buy into.