Tempt Me at Twilight 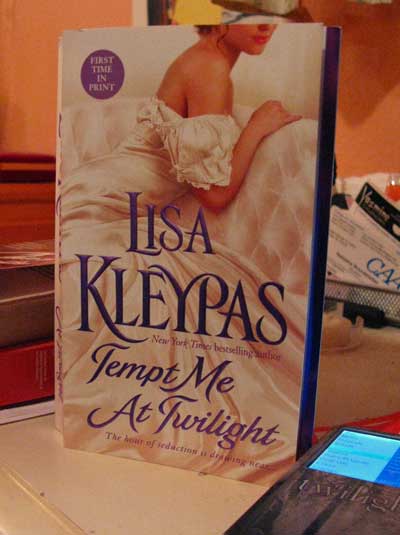 Tempt Me at Twilight by Lisa Kleypas

This is the third in Kleypas' Hathaway series, which features the crazy-but-lovable brood of the Hathaway family and their sexy Rom brothers-in-law. The book has pacing and plot problems, and is definitely not as good as its two predecessors; but it's still an enjoyable read.

In this installment, Poppy, the supposedly "normal" Hathaway, meets the owner of Rutledge Hotel (THE hotel), Jay Henry Rutledge. Did Kleypas run out of gypsy heroes? I'm sure she could have found some distant relatives of Cam's and Merripen's if she'd tried. Anyway, despite the fact that he's not as interesting as either of those characters, Harry Rutledge decides he wants Poppy. But oops--she's already engaged to a future viscount. Don't worry, though, Harry gets her to marry him anyway. That's when the story really starts.

Like I said, I had fun reading this book. But it's kind of a mess. Harry is okay, although all the disparate elements of his personality that we're introduced to aren't really pulled together into a cohesive character. The same is true for the Rutledge hotel itself; I loooooooved the staff and wanted to know more about them, especially Chef Broussard. He had every single lawl-worthy line in this book. Two of the more memorable ones:

The chef gave him a patronizing glance. "That's how much you know. Mr. Rutledge will marry, once he finds the right woman. As my countrymen say, 'A wife and a melon are hard to choose.'"

Broussard shook his head in disbelief. "What is the matter with you British?"

"He's not British, he was born in America," Jake snapped.

"Oh, yes," Broussard said, recalling the indelicate fact. "Americans and romance. It's like watching a bird try to fly with one wing."

The indignant Jake in the latter quote is another great character, as Rutledge's valet/hired thug/secretary. I definitely hope to see more of him in future books! The Rutledge Hotel is--or rather, could have been--another character itself, filled with secret passages and strange events. But we never really learn anything more about it beyond superficial facts and settings. Where was Kleypas' fabulous research skills when she studying up on hotels? I have to confess, I was looking forward to seeing the inner workings of a 19th-century hotel, but Poppy seemed to spend most of her time in her room, reading.

And that leads one to Poppy. Since when has she been the "normal" Hathaway? Is every Hathaway we encounter going to think of themselves as normal, one wonders? I liked Poppy, but her attraction to--and supposed love for--Michael Bayning was ridiculous. The man was obviously a spineless wimp; and really, who would marry a future viscount in an effort to attain normalcy??? Try a parson or something, honey! Her anger at Harry for getting rid of Michael is very difficult to sympathize with, especially since she and Harry start making out the first time they meet (really great kiss, btw)! Didn't she at some point think to herself, "Hmmmm, I'm kissing and thinking about one man and planning to marry another. Is this a good sign?" She deserved to be tortured wayyyyyy more than she was in this book.

Beyond that, the story doesn't really flow well. The backstory inserted into places at the beginning of the novel stops the narrative and it takes a while to get it going again.

You're probably wondering why I even liked this book at this point. Well, to be honest... I have no idea. I suppose I enjoyed reading more about the Hathaways. Kleypas knows how to write historical romances; I just wish she would have pushed this one farther. Make Harry more ruthless, do more with the hotel, more with the interactions between Harry and Poppy, more with the plot. But yes, it was still good.

Other opinions:
Dear Author
Lurv A La Mode
Romance Rookie
AnimeGirl's Bookshelf
The Good, the Bad, and the Unread