The Point of Vanishing

This was the last episode in the second season of Inspector Lewis (aw, sad ;_;), and it was the best EVAR!

The episode opens with a party to celebrate the promotion of some blonde woman to inspector.  Hathaway is brooding and slugging down liquor with a fatalistic air, so it's pretty obvious something has been going on with him and the blonde.  Lewis remains oblivious.

Then someone is murdered.  The victim is identified as a man who drove a truck into some rich person's car back in the day, crippling their daughter.  Lewis and Hathaway meander over their mansion and meet an "American" (the accent was a little sketchy on that one) girl with red hair living with the family; their son and wheel-chair bound daughter, the nice-guy dad, and the evil bitch mother.  The American flutters her eyelashes at Lewis and they spend the next forty minutes flirting, because Americans are sluts like that.  Oh, did I mention she's engaged to the son?  Meanwhile, Hathaway makes friends with the daughter, and she invites him to her birthday party, where yet another murder occures. 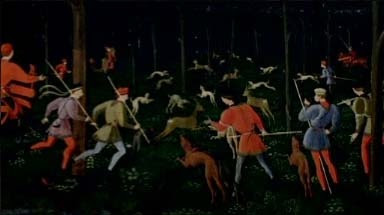 It was pretty obvious from the get-go who the killer was in this episode; but I loved how Lewis figured it out because he used a painting!  Lewis and Hathaway first become interested in it when they find a postcard of the piece with "It was no dream," written on the back.  I'm not sure what painting it is in real life; in the show was mearly described as "a Renaissance painting" (if you recognize it, please let me know).  It depicts hunters, dogs, and other animals rushing into a dark forest in pursuit of a distant lady on a horse.  As the overly enthusiastic museum volunteer told them, the painting represents courtly love, which was viewed as analagous to the pursuit of the hunt in the Renaissance.  But (she continued), what makes the painting so compelling is the element of danger--the hunters don't know what they're rushing into within the darkness of the forest.  Is the lady leading them to bliss or danger?  They have no idea, and they don't care; the possibility of love is too alluring to allow them to pause.  This proves to be a good metaphor for the entire episode, as many of the characters are looking for love in all the wrong places.

I adored this episode because 1. Lewis managed to look at a work of art without making fun of it (much); and 2. it was all about love and forgiveness.

And what about Sgt. Hathaway and his over-before-we-even-knew-it-existed romance, I'm sure you're wondering.  Well, Lewis eventually gets a clue (because the pathologist hits him over the head with it), and tells Hathaway he needs to "say goodbye properly" to the blonde.  Then he watches them kiss from her apartment window, which is kinda creepy.  So much for Hathaway and his monkish ways, I guess.  As for Lewis, at the very end of the show he looks at the postcard of this painting, which I think is a clue that Lewis himself is ready to pursuit of love again, as well.  But we'll have to wait until season three for that.