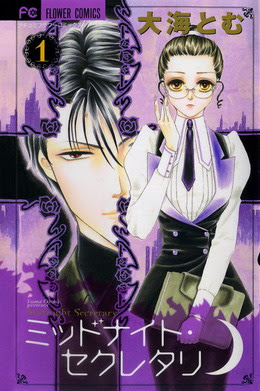 It's day three of BBAW and I'm already exhausted!  (Not necessarily because of BBAW though.)  ANYway, today we're asked to share a book or genre we tried because of the influence of another blogger.

I picked manga, mainly because I haven't talked about how I was introduced to it before.  My brother has read manga forever, so it was on my radar, but I have to admit I wrote it off as something that wasn't for me.  Mind, this was my brother, so the manga he read was all about fighting Pokemons.  I didn't have any exposure to any other form of manga, or even graphic novels.

Before I started book blogging, I used to read Smart Bitches Trashy Books.  Not religiously, but off and on.  One day they had a short post on a manga you could read online for free called Midnight Secretary.  They warned me my entire day would be sucked away reading it--oh, they warned me!  But I couldn't resist just giving it an itty bitty peek, especially as it was called "Harlequin: Presents crossed with manga and vampires."

This manga is totally dumb and weird and enjoyable and I could not. stop. reading it!  After nineteen hours straight I finished and had to find other vampire romance mangas to read like right away!  Which is how I started on Vampire Knight (fabulous) and Rosario + Vampire (very fun).

So there you have it.  The Smart Bitches convinced me try manga and opened up a whole new format of reading to me, and it was definitely an unexpected treasure.

What books have you unexpectedly enjoyed that were recommended by another blogger?