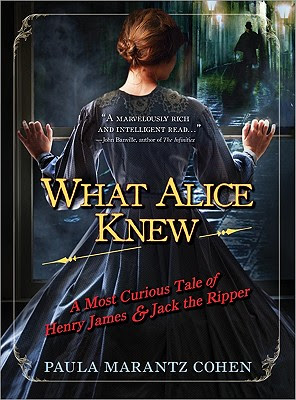 Immediately after I requested this book for review from Sourcebooks, I had a long pang of doubt--in my experience, novels that use Jack the Ripper in the plot are to be avoided.  However, I'm happy to say this book is an exception.

The unlikely hero of this tale is writer Henry James, who, along with his brother, William (a professor at Harvard and an early expert in psychology), and his sister, Alice, helps to investigate the Ripper murders.

This book is so much fun, mainly because of Henry.  One wouldn't expect someone like Henry James to be funny, but he really is--in a cute, bumbling sort of way.  Alice is another great character--she's smarter than both of her brilliant brothers (as she says at the end of Chapter 4, "I will review what you gather... and solve the case." There are a bunch of awesome one-liners in this book, btw), but remains largely bed-bound, viewing herself as an island of reason in an insane world.

Jack the Ripper has been done and re-done to death in books, movies, graphic novels--just about any format you can imagine.  In What Alice Knew, however, it doesn't even feel like the Jameses are investigating Jack the Ripper, because Cohen brings such a fresh spin to it.  And she uses the investigation to showcase numerous people and subjects: John Singer Sargent, Oscar Wilde, women's suffrage, photography, art (both academic and avant garde), social class, bigotry, religion, dinner parties, laudanum, theater, and just about anything else you can think of.  In fact, it reminded me of Drood in the way it seemed to submerge the reader completely in the world of the Victorians (except it's much better because it's about 500 pages shorter).

That being said, once the siblings' investigation got underway in earnest, the book ironically became a lot less interesting.  This was because the main suspect was so obvious, you knew he couldn't be the Ripper; but there really weren't any other leads to follow, which made the whole thing seem rather pointless.  The last one hundred pages seemed to drag by.  There were also two romances involving both Alice and William, respectively, which were absolutely delish in their Victorian subtlety and unspokeness; even though I enjoyed them, though, I think William's romance especially seemed like a tangent to the central plot of the book and slowed the narrative wayyyyy down.

I also hated the ending.  While I can see, I think, where the author was going with it, it didn't feel supported by the rest of the book.  Cohen was trying to fit the ideas that you can never truly know another human being, all situations are about context, and did-they-catch-the-killer-or-didn't-they (?!??) into the last 10 pages of the book, and for me it really didn't work.

Overall, though, this was a very good novel--definitely one of the best Victorian-set historicals I've read in a long time, and the kind of book I would recommend unhesitatingly.  When I finished, I felt like the cloying atmosphere of Victorian London was physically clinging to me, and I do admit to still missing Henry.  If you're a nineteenth-century geek, you really, REALLY have to pick this one up!