One Night That Changes Everything by Lauren Barnholdt 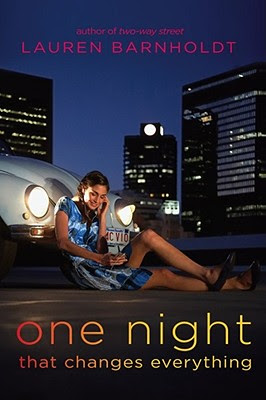 Sooooo, remember that movie Nick and Nora's Infinite Playlist where the girl makes a big deal about how she hasn't had an organism in her sixteen loooooong years of existence, and then that guy who was in Juno gives her a hand job in her dad's recording studio and you're like, "Eugh, where's a cutaway scene when you need one?"  Well this book is kinda like that except totally without the orgasm.

See, Eliza has this notebook where she writes all the things she's afraid of.  And most of them are pretty stupid BUT understandable, like most everyone's fears.  Then she breaks up with her boyfriend--I won't tell you why, but he's a total playa--so her boyfriend's douchey friends steal the notebook and then spend an entire night forcing her to do some of the things she's afraid of.  Most of the things wind up being really fun and cool, though, so REALLY she should be thanking them instead of breaking into their house... but I digress.  Eliza and her friends have this totes ah-mazing night where they discover deep, personal truths about themselves and hook up with a bunch of guys but I don't think their definition of hook up and mine are the same.  In fact, I'm pretty sure they're not.

You can get through this book super-quick.  It's for the 12-13 crowd and has the feel-goody message that it's okay to make mistakes and do things you're afraid of.  None of the tasks Eliza has to do are dangerous or anything, so there's no sense of tension or danger and it finishes off with the warm fuzzies.

But OMG, what was up with Cooper?  The dude was pathetic!  He kept following Eliza around for no reason, even though she kept telling him to bugger off, and then he has to save her at the end?  What. Ever.  His entire existence as a character was totally just an excuse to set up this scenario where Eliza has to face her fears and it was super-fakey.  And who names their kid Cooper, anyway?

Anyway, I read this book right after watching Easy A, and now I can't stop talking like this!  Halp! 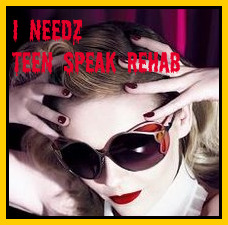