Movie Reviews: Easy A & The Searchers 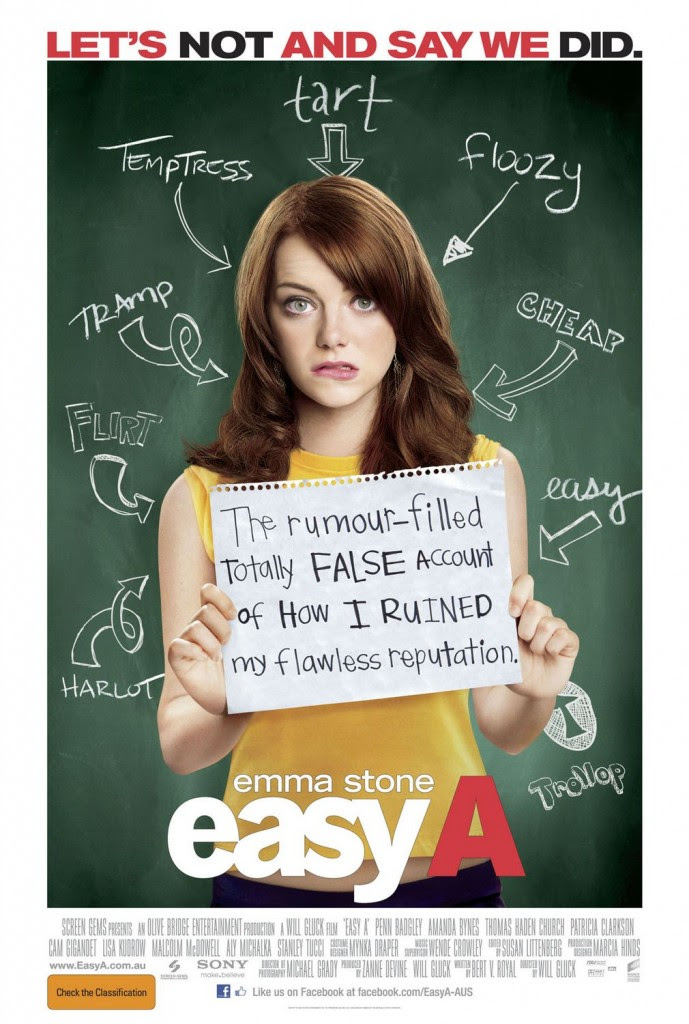 After lying to her best friend about losing her V-card, Olive becomes the enemy of her high school's Christian faith group, led by Marianne (who totally ripped her hair style off of Sarah Newlin in True Blood).  Olive then discovers how easy it is to gain a bad rep without doing anything.

This movie is based off The Scarlet Letter, although it references the film versions more than the actual book.  In The Scarlet Letter, Hester Prynne commits adultery, thus being forced wear an A on her chest.  Olive also wears an A, usually on a boob, even though she's not married (or even dating), and really just pretends to be a slut.  This makes no sense.  Why not wear an S?  Or a W for whore?  Or a WW for a wanna-be whore?  Also, adultery is morally wrong, whereas having sex with consenting partners isn't, and pretending to have sex with the social dreck of the school's male population is just stupid, so that kind of takes all the moral ambiguity out of it.

Bad adaptations aside, this movie was actually enjoyable.  It was funny and the romance, once it got going, was very sweet.  Although the portrayal of gays was very stereotypical (the decorating line again, really?), and the Christian faith group suggested more of an attack on religion than fanaticism. 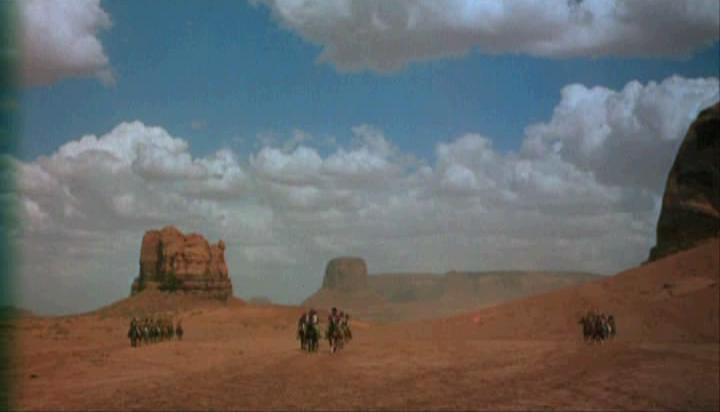 A much more subtle attack on fanaticism can be found in John Ford's The Searchers, starring John Wayne.  Wayne's character, Ethan, becomes obsessed with seeking vengeance for the murder of his brother's family by Comanche Indians--to the point where he decides to kill his niece after finding her married to a Comanche chief and integrated into Indian society.

Ethan is definitely a fanatic, and it's hard to tell exactly how far he will go.  One doesn't want to think he will go so far as to kill the innocent in his total disgust for the Indians, because he shows occasional signs of awesomeness (and he's John Wayne), but evidence suggests otherwise.  Screams it, actually.  For Ethan, his niece, Debbie, represents both something he loves--his brother and most particularly his brother's wife--and something hates--the "Comanch."  Which side will win out for him in the end, love or hate?

The strength of this movie really lies in the fact that Ford doesn't spell out the whole story.  He gives us hints and then lets us fill in the blanks, particularly when it comes to Ethan.  He remains an ambiguous figure until the end of the film, and we're left with questions that we have to answer by reconstructing the movie in our minds.  Where did Ethan get the money he gave to his brother? What did Ethan see when he went into the canyon on his own?  Is Martin Ethan's son?

The movie is also very racist--women stolen by the Comanche as children behave as if they're mad or have been raised by wolves; Martin's Indian wife, Look, gets shoved down a cliff and the camera doesn't even follow her; and Martin himself faces plenty of taunts and outright racism because of his one-eighth Indian ancestry.  Yet this is supposed to be a "revisionist" film where the Indians are treated more sympathetically than they had been in the past!  I think that all hinges are Martin, who is obviously the hero.  Some might call Ethan the hero, but I don't think the story is told through Ethan's eyes--we see Martin's perspective, the spectrum of good and evil, racism, opportunity, fellowship, love, hate, white, Indian, Mexican, danger, and home that makes up the tapestry of the West.  If the film had been told from Ethan's perspective, it would have been in black and white.

Although this was a good movie, I didn't enjoy it a lot.  It just went on and on and on, and I can't believe they spent THAT LONG looking for that girl.  Honestly, I expected Ethan to just fall over dead at the very end.  It was also a very dark film.  But I would definitely say that it's worth seeing, especially if you like Westerns--or Star Wars, for that matter.