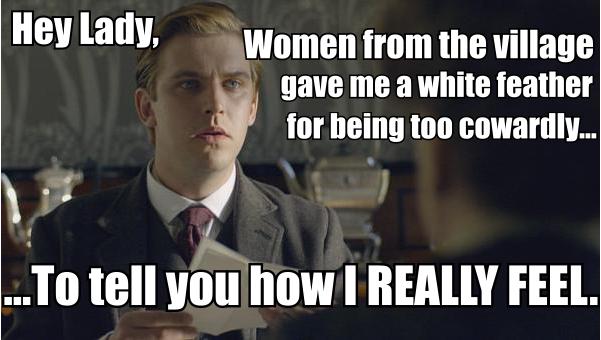 I read an article recently titled, "Why Men Like Downton Abbey." While the main purpose of the article was to make fun of the idea that men can't enjoy historical drama (and I agree that's pretty stupid), I think the question of masculinity plays a big role in the series, and that's part of its attraction. As one respondent to the informal poll replied,

There's a Clint Eastwood epic flowing through the show in that everyone has deeply repressed emotions and is big on obligations to duty. I don't think you see that in American shows so much, especially with reality TV. Everyone is putting their thoughts out there and emotions are heightened. [In 'Downton'] people are swallowing their deeply held feelings and doing their duty anyway. I wish I had the ability of Mr. Bates to stuff everything down into a dark hole, but instead I'm Twittering.

You're right, guy who confuses Twitter (noun) with tweeting (verb)--even if Downton Abbey had wifi, Bates would be too busy being awesome to use it. I'm pretty sure the whole reason WWI started was because he was no longer in the government's service and thus unable to prevent it. Also: Clint Eastwood.

To my dad's generation, Eastwood is what John Wayne was to my grandfather's generation: the embodiment of what a man should be. And it's no coincidence that both actors made their name in westerns, a genre that's all about coming-of-age and masculinity. So I think when Twittering Guy compares Downton to "a Clint Eastwood epic," he's actually identifying the themes of manliness running through the show.

Unfortunately, none of the men on Downton are doing a very good job of maintaining their masculinity. As I mentioned on my recap of the Series 2 finale at Edwardian Promenade, practically every man on this show, with the possible exception of Carson, is emasculated by the end of the season. Let's take a quick run-down, shall we? Clint Eastwood and Lady Violet have a similar opinion of you.

If there's any character that embodies Clint Eastwood's masculinity in Downton Abbey, it's Lady Violet. Who's the only person with a clue as to what's going on around the Abbey? Who's the person that successfully outmaneuvers the military and the church to get William to Downton Hospital and married to Daisy? Who's the only one with the cojones to tell Matthew that Mary is still in love with him and he needs to man up? Who sweeps in to save the day whenever one of the sisters needs help? LADY VIOLET, that's who. Then she rides off into the sunset in her fancy equipage and feathered hat.

I suppose it's no surprise in a show about a house that the male characters aren't quite as masculine as Clint Eastwood, but it would be nice if they asserted themselves more in Season 3. For example, when refused a place in the military, Lord Grantham could say, "You may stop me from serving as an officer, but can you stop me from sailing my yacht full of explosives into the German fleet?" instead of, "What's the meaning of this? *bluster bluster bluster*" And instead of telling Mary "I'm so so sorry," Matthew could say, "Get on that table so we can add a rhythm section to this gramophone record." Then they'd be giving Lady Violet a run for her money.