Gil, a Hollywood writer and aspiring novelist, is in Paris with his fiancée. He loves the romance of Paris, but she cares more about following around her pedantic friends. From the start, it's pretty clear this relationship isn't going to go anywhere. Then, after trying to make his way to his hotel one night, Gil is pulled into an olde-timey car by a bunch of partiers and swept away to 1920s Paris, an era he idolizes. 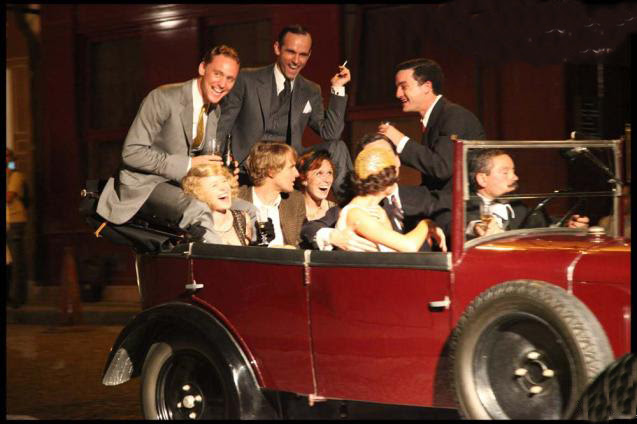 It would be more than fair to call Midnight In Paris a love letter to the City of Lights, but the portrait it paints is distinctly America's love affair with Paris, not Paris as she actually is. The places Gil visits with his fiancée are in every travel guide you can pick up, and the people he meets on his forays to the past are predominantly American ex-pats: Cole Porter, Josephine Baker, Ernest Hemingway, Man Ray, Gertrude Stein. This isn't a film that strives to shine a new light on Paris; it buffets you with every romantic stereotype of the city there is.

The best parts of Midnight In Paris are, of course, the scenes that take place in the 1920s. Gil goes to the coolest parties, meets everyone worth knowing, and gets writing advice from his idols. Who wouldn't love this scenario?

Of all the characters he meets in 1920s Paris, Ernest Hemingway was my absolute favorite. I literally gasped when he first appeared on-screen. Ernest freaking Hemingway! I hate the guy's books and even I would geek out if I got to drink with him. Plus, he gets the best lines in the entire film (Gertrude Stein gets a few good ones in, too), and talks just like you would imagine Hemingway would talk if he was reading one of his own books aloud. It's hilarious.

As for the other 1920s characters, like Dalí, Stein, and the Fitzgeralds, their personalities felt watered-down in order to be more palatable and attractive. But I was surprisingly okay with that. This movie is pure fantasy, after all, and doesn't make any claims toward historical (or contemporary, for that matter) accuracy.

There are two connected thematic threads running through Midnight In Paris: one is the fear of death (it IS a Woody Allen movie, after all). Hemingway says, "You'll never be a great writer if you fear dying. Do you?" "Yeah, I do. I would say it's my greatest fear," Gil replies. I would say his fear of FAILURE is more of what's keeping him from taking chances in his writing and his life, but whatever you say, Ernest.

The second theme is one of romanticizing the past. It seems ironic that someone whose greatest fear is death would idolize only dead writers, but it's also appropriate. As I said, Gil is more afraid of failure--of living--than he is of death. The lives of artists in the past is comforting to him because from the perspective of the present, it seems as if they knew more or less what they were doing. But they were just as in the dark and uncertain as we are.

Midnight In Paris is a good movie--it's perfectly paced, hits all the right notes, is gorgeously shot, and Owen Wilson is ideally cast as the lead. It's funny and romantic and whimsical. If you love Paris or literature, you HAVE to see this film.

Gil: You can fool me, but you CANNOT fool Ernest Hemingway! [LOL]